The objective of this experiment was to compare different American oak profiles in the same wine. Every profile used the same wood lot and seasoning time, was air dried in the same yard, and was processed under similar conditions. Each profile had four barrels made at the Missouri cooperage. The toast monitoring system, known as Barrel Profiling Technology, used by World Cooperage insures that all barrels of the same profile were made maintaining a similar average temperature during the toasting process, with an acceptable tolerance for error shown later in a plot of the mean for the curve and the Standard Deviations. The objective was to maintain all variables as fixed as possible, with the exception of the toasting curve, to evaluate the effects of the toasting. Thus, the same wine lot was divided among all the barrels after malolactic fermentation, with barrel ageing of about 10 months. All samples were bottled at the same time to reduce variation.

The findings in this report may be summarized as follows:

The strongest argument that can be made for the technique of temperature-time profiling is the ability to create profiles that will be attractive to all winemakers as they may customize based on desired wine style or blending component. This study of American oak profiles clearly demonstrates that capability.

In the past three years several new profiles in American oak have been developed at World Cooperage with the purpose of making more elegant barrels from this oak type. The newer profiles are normally toasted for longer time periods at slightly higher temperatures, resulting in larger differences to the initial American oak profiles.

In this experiment, a Cabernet Sauvignon wine from 2005 vintage was studied in 18 different American oak barrel profiles made by World Cooperage from the same lot of wood and a control set of used 2002 barrels. There were four barrels of each profile and 52 barrels of the control. 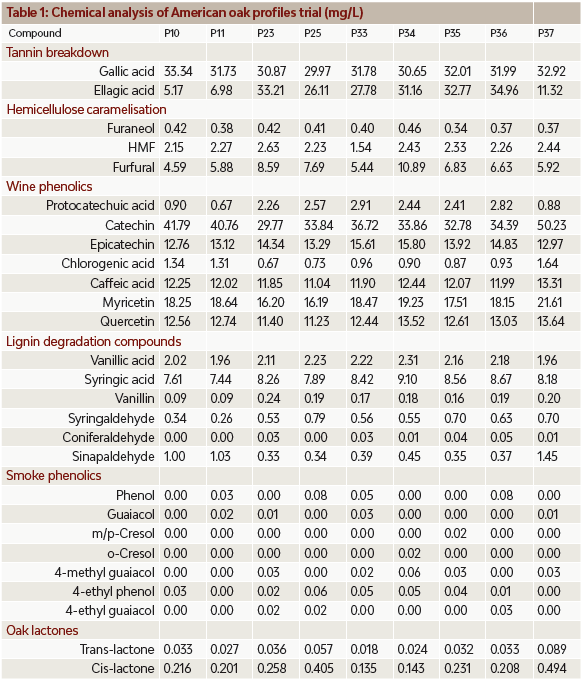 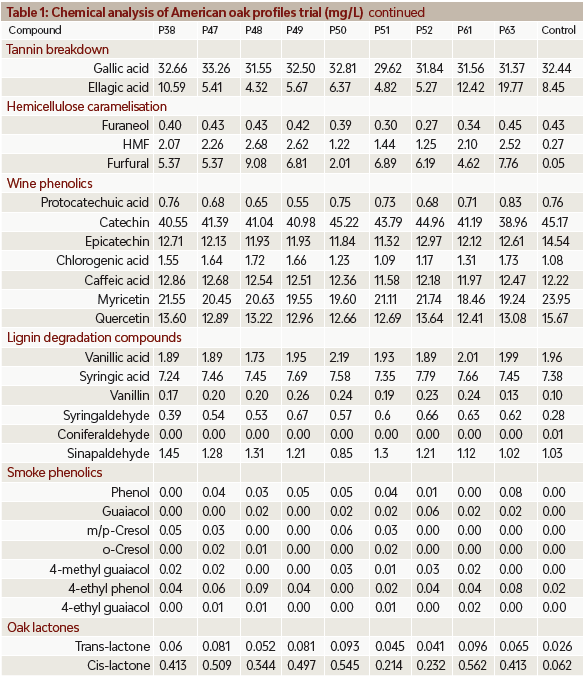 Because Table 1 shows only numbers and it is easier to visualize chemical concentrations in bar charts, the bar charts of the most relevant chemical markers will be discussed after explaining the sensory results. 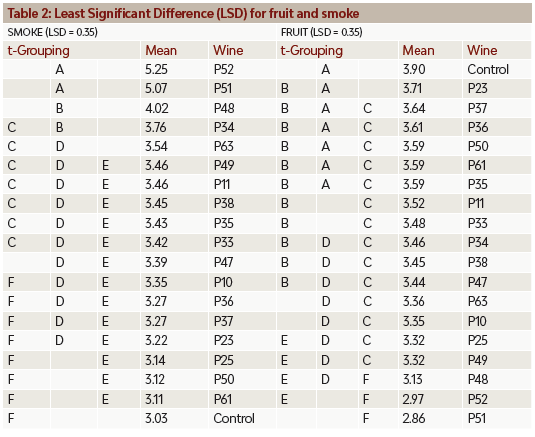 Only fruit and smoke were statistically significant to the 5% level and the LSD is shown in Table 2. There is a positive correlation with preference and fruit perception, so the more fruit the more preferred. These results verify the good performance of the tasting panel because the control wine, made in used 2002 barrels, had the highest score for fruit and the lowest for smoke. This was expected due to the low impact of toasted oak character from used barrels. 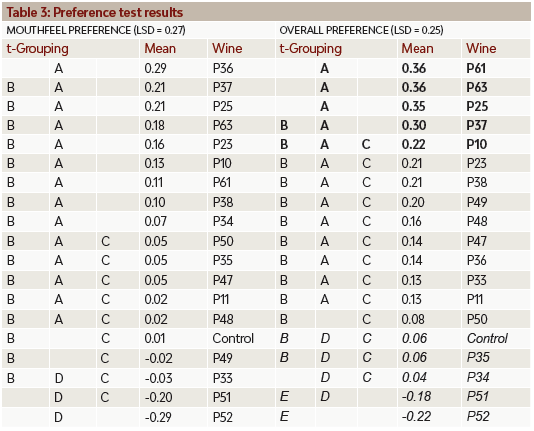 Table 3 shows that almost all variables have positive scores for overall preference, so the majority of them were somewhat liked. Because the panel was focused on finding small differences, five profiles are indicated in bold as the most preferred and five are indicated in italics as the least preferred. At this point, the panel was evaluating each profile individually as a finished wine, but in reality some of the least preferred profiles have very strong characteristics in one attribute that could make them unique for blending purposes. Mouthfeel and overall preferences were both statistically significant and the LSDs show what group of barrels was significantly different from the rest.

At this point we will examine the data plots of the toasting profiles to see if a correlation to the sensory data exists. 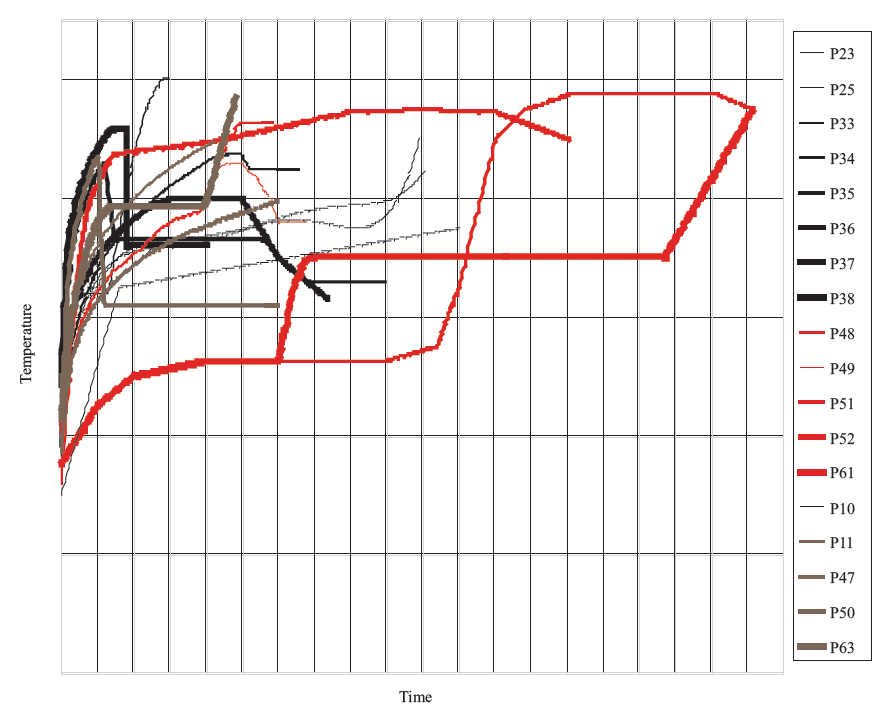 Profile Graph 1. Comparison of all the toasting profiles in the data set

Profile Graph 1 shows the data plots for all of the toasting profiles in the data set of the experiment. To better evaluate if a relationship exists with the sensory data, we will graph only those profiles at the opposite extremes of the sensory results. 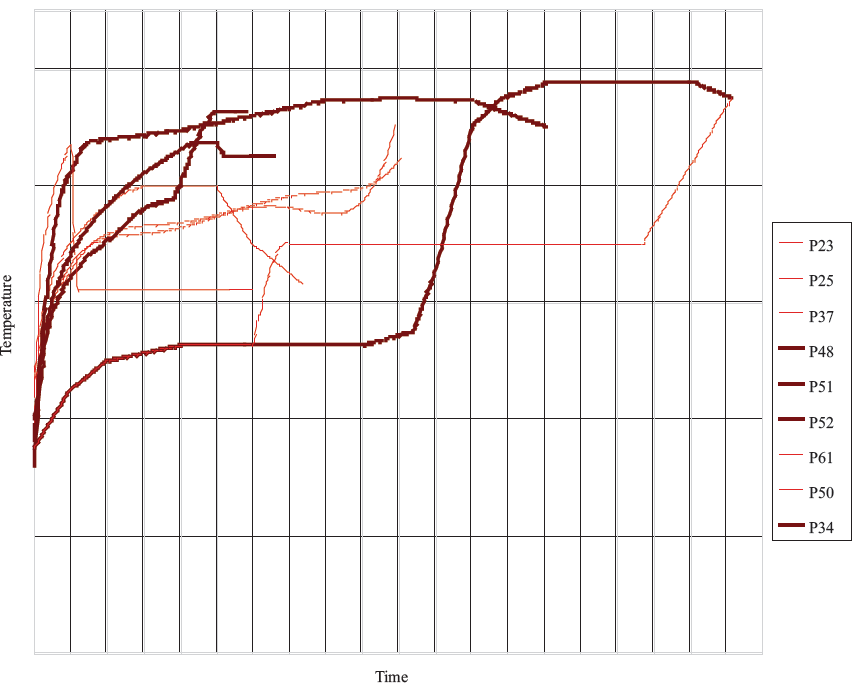 It is not surprising to see a similar conclusion when we graph the toasting profiles at the opposite extremes of the sensory data for the fruit characteristic. 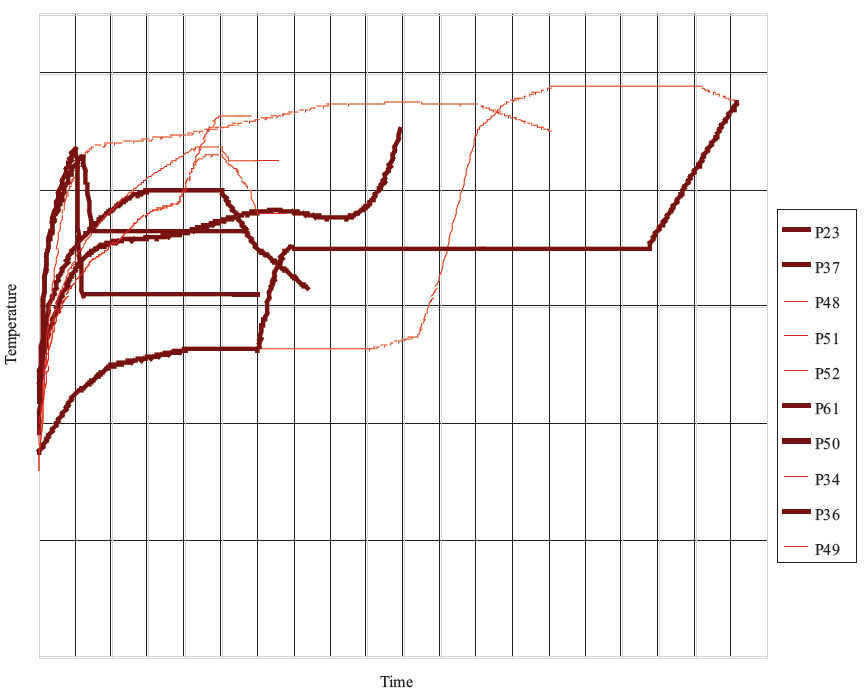 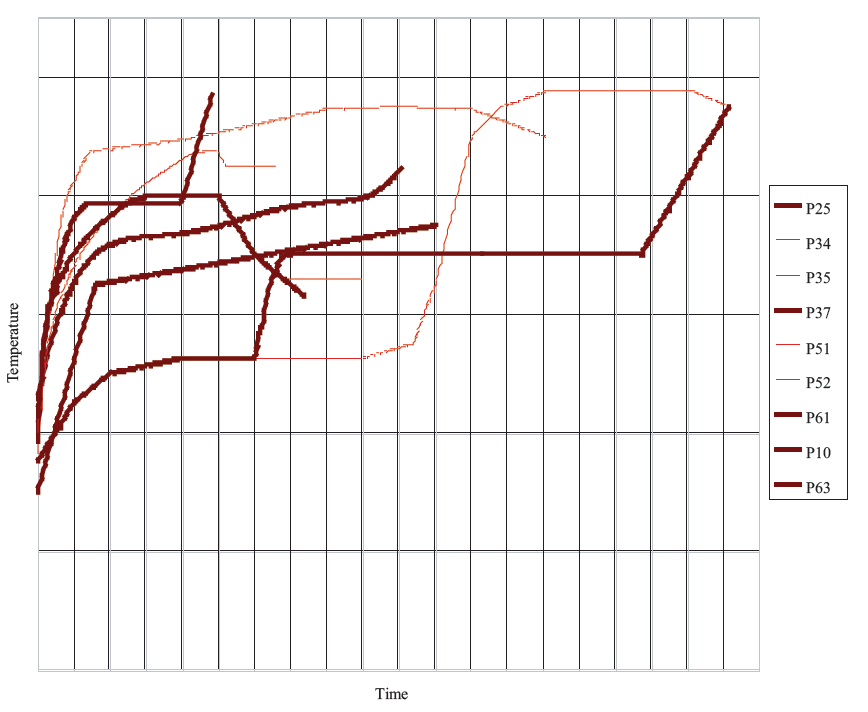 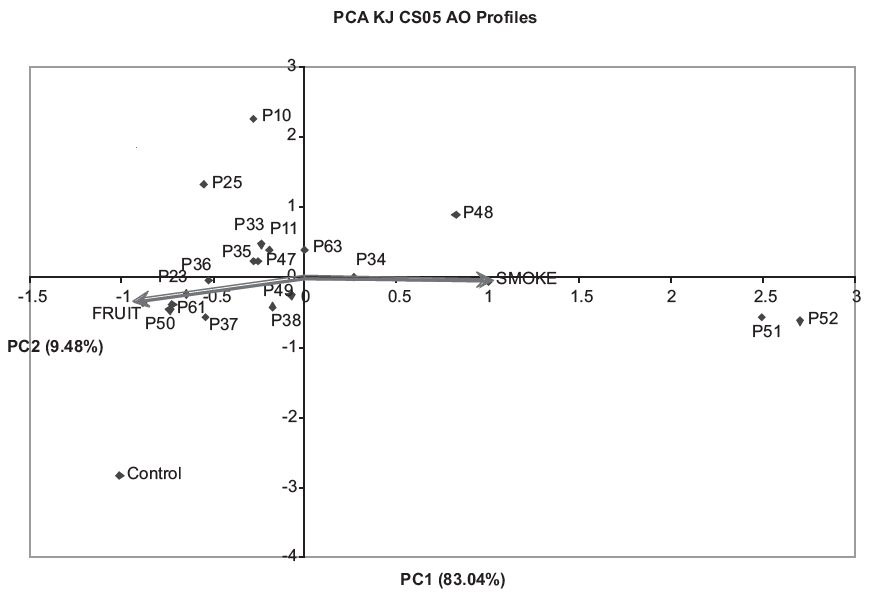 Figure 1 shows the distribution in a two dimensional space of all the barrels included in this experiment. The only vectors plotted are fruit and smoke because they were the only significant ones. For the plotting of this figure, all attributes have to be considered because they had an influence, even if they were not statistically significant, and were not plotted to make the visualization easier. It is clear that the control had the most fruit and less smoke and profiles 52 and 51 had more smoke and less fruit. 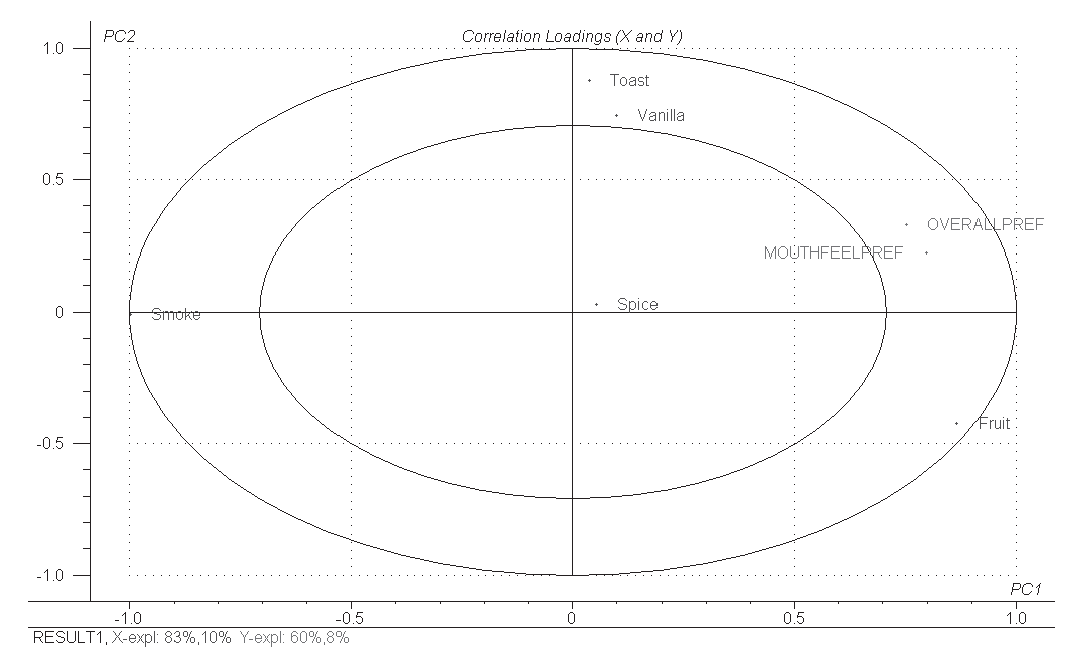 In Figure 2, even though vanilla and toasty attributes were not significant in this experiment, they did have a positive influence in the preference scores. However, the only statistically significant information is that the preference was negatively correlated to the intensity of smoke perception and positively correlated to the fruit perception. 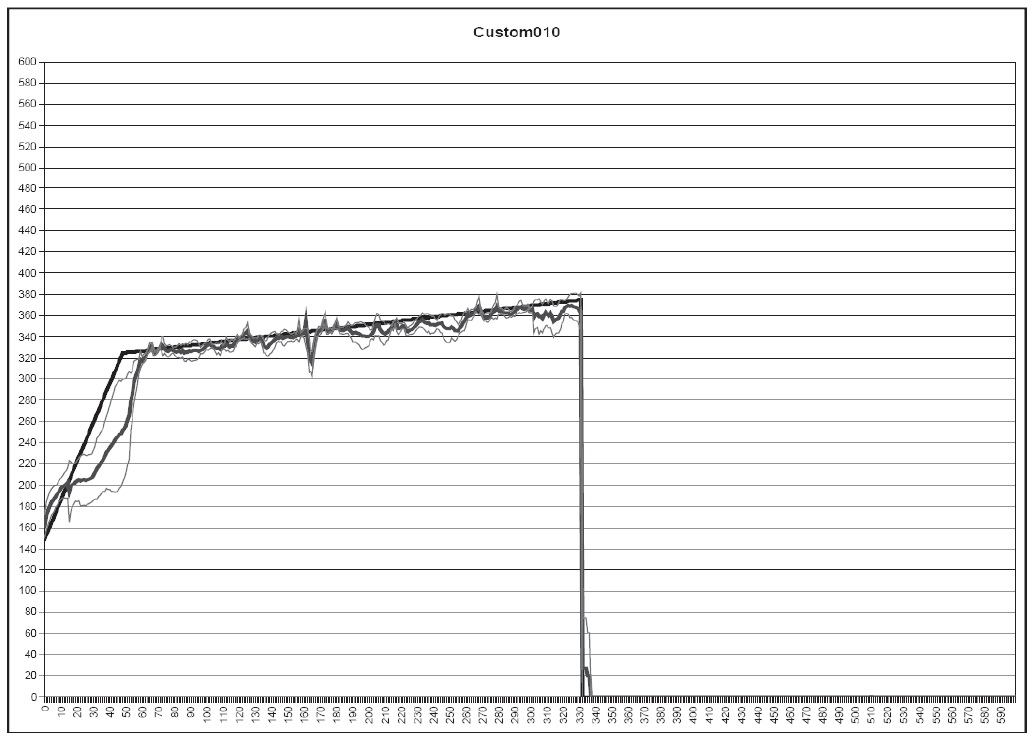 There are similar graphs for all the profiles used in this experiment, but we are showing only Profile 10 as an example. The information in Figure 3 is the average of the four barrels toasted following the curve of Profile 10 and the mean of the Standard Deviations of all profiles used in this experiment. Some of the larger differences during the toasting process are due to the flipping of the barrel. Because each barrel is not flipped at the same exact time, this can have a significant influence on the standard deviation. It appears from Figure 3 that Profile 10 was followed to within an acceptable range of time and temperature.

The similarity (or extent of difference between particular barrels / wines) in their chemical analysis can be shown by a multivariate projection technique such as Principal Components Analysis (PCA). Figure 4 shows the major differences between the American oak profile wine barrel types. In fact, this chart accounts for about 60% of the information contained in analysis (the addition of horizontal and vertical axes). Inspection of the remainder of the information in the chemical analysis did not reveal any other significant findings.

Figure 4. Principal Components analysis of the chemical analysis from the American oak profiles 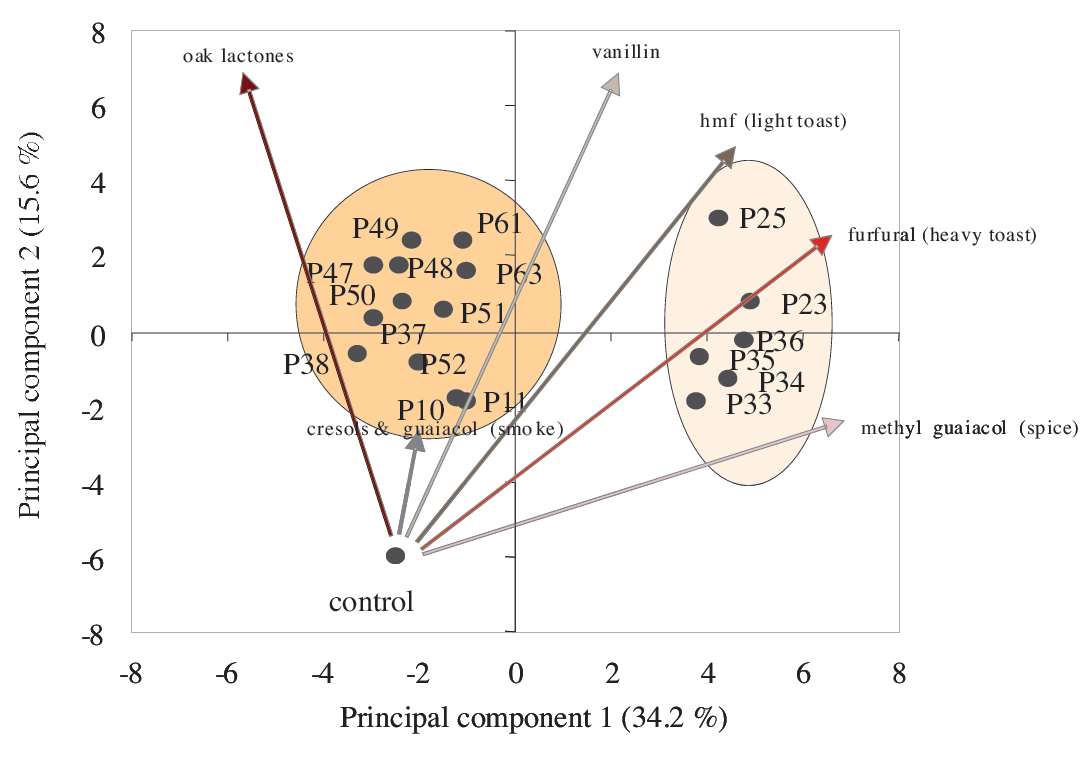 Inspection of Figure 4 shows that the control sample is very different from all the profile samples. It lies in a very different region of the chart compared to all the other samples. The diagram also suggests that the profiles are split into two groups, one lying to the left side of the chart and the other to the right side. Figure 4 also shows (as arrows – vectors) several of the chemicals that were analyzed and how they affect the samples. Thus, the cluster on the left side seems to be influenced mainly by the oak lactones and the cresols plus guaiacol, i.e. smoke. By contrast the cluster on the right side is associated with toast (hmf and furfural) and spice (4-methyl guaiacol). The important chemical vanillin appears to straddle the two clusters.

Figure 5 shows the vanillin levels in all the samples. It overlaps the two clusters because the amounts, while varying from one barrel to another, are basically about the same average value. Within each group, however, vanillin reaches its highest level in Profile 49 and is also high in profiles 50 and 52 (left cluster) as well as Profile 23 in the right cluster.

The lowest levels of vanillin occur in profiles 10 and 11. In these wine samples they average around 0.1 ppm which is enough to add flavor complexity without giving an obvious vanillin aroma and leaving other aspects of the barrels to create their unique character. 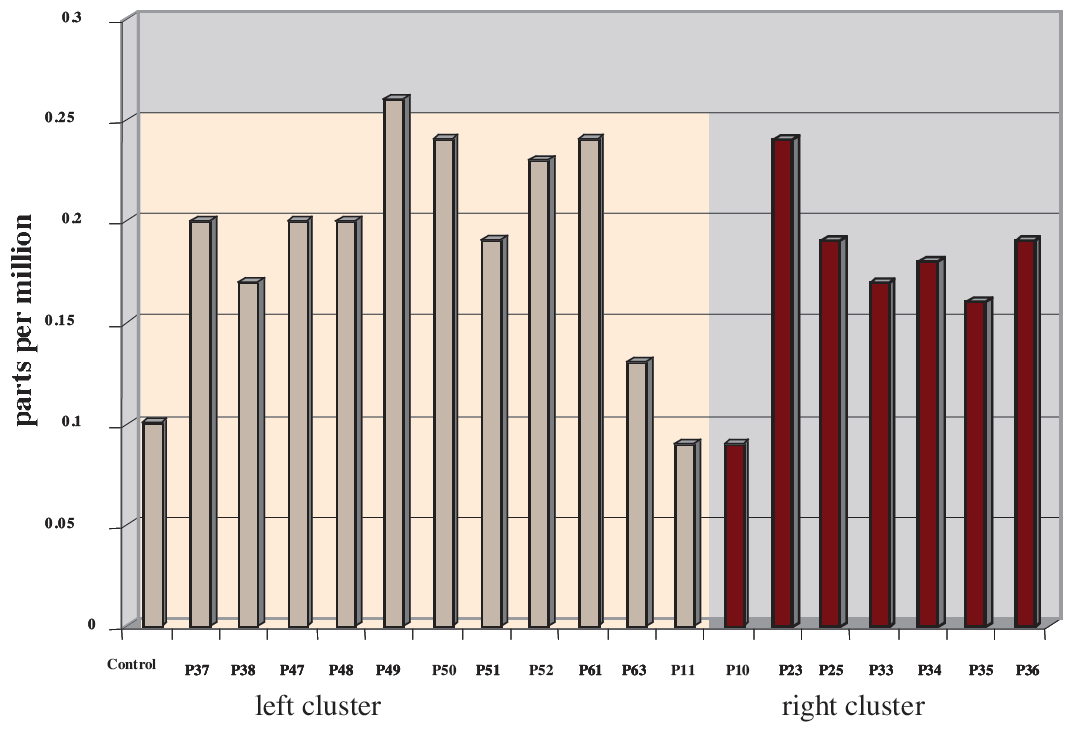 Figure 5. Vanillin content in the wines from all the barrel profiles

The most obvious feature of the left cluster seems to be the lactone content. Figure 6 shows the amounts that are present in the wines. The merest glance at Figure 6 clearly illustrates that lactones are higher in most of the left hand side cluster. However, there are exceptions. Accordingly, it may be helpful to make the point here that the location of each sample is dependent upon all of the chemicals measured in the wine. Therefore in some cases there may be samples that lie in a cluster that is apparently dominated by one particular chemical but nevertheless contains less than other wines in the group. This is because of the content of other flavor compounds and this will be illustrated again later in this report. Oak lactones are highest in profiles 61 and 50, where the quantity present would be expected to exert a significant effect upon the wine flavor. Oak lactone is lowest in profiles 33 and 34. 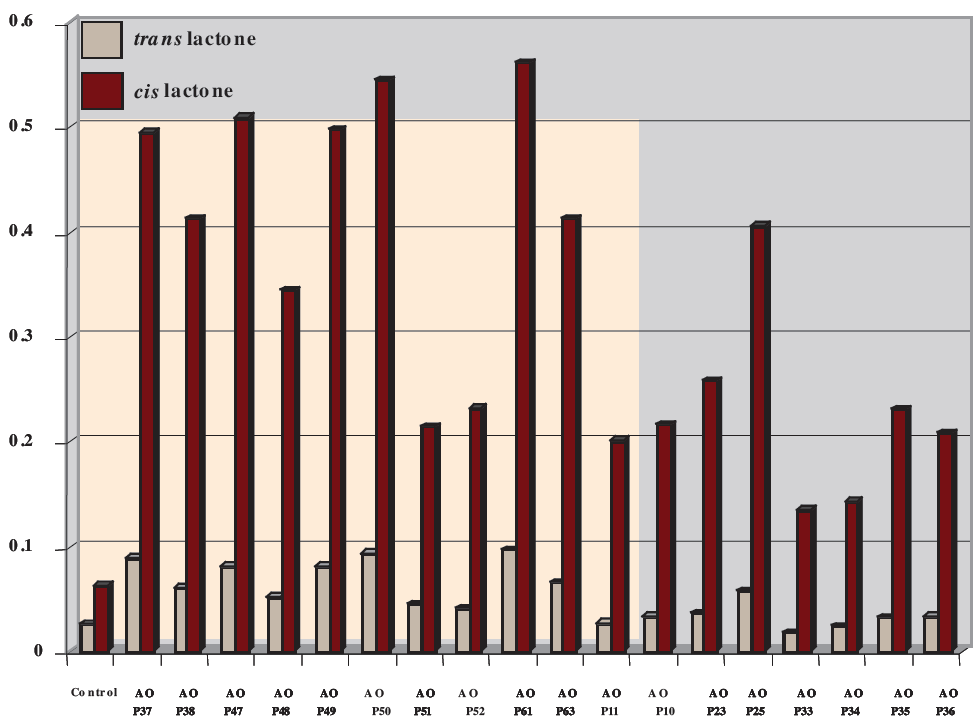 Figure 6. Oak lactone content in the wines from all the barrel profiles (cis and trans lactones)

The other compounds that characterize the left cluster are smoke components, mainly m- and pcresol and guaiacol. By comparison, guaiacol can be attractive on occasions whereas the cresols are an unattractive feature in wine and are seldom likely to be sought after. Figure 7 shows the relative amounts of cresols and guaiacol in all the samples and it clearly demonstrates that these characterize most of the profiles in the left cluster.

Figure 7. Guaiacol and meta and para cresol contents in the wines from all the barrel profiles 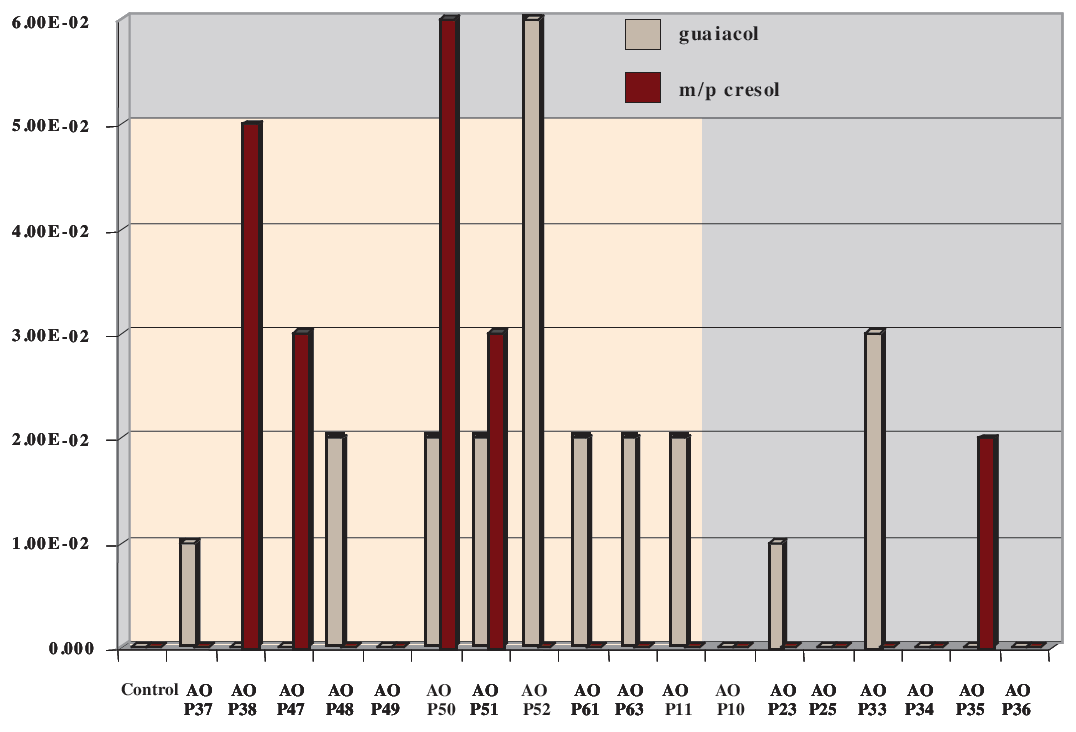 The right cluster gives the appearance of being characterized by toasted oak character.

Figure 8 shows the levels of hmf, which is 5-hydroxymethyl furfural and a marker for light cream toast. It also highlights furfural which is an excellent marker for a heavier flavor of toast.

Figure 8. Hmf and furfural in the wines from all the barrel profiles 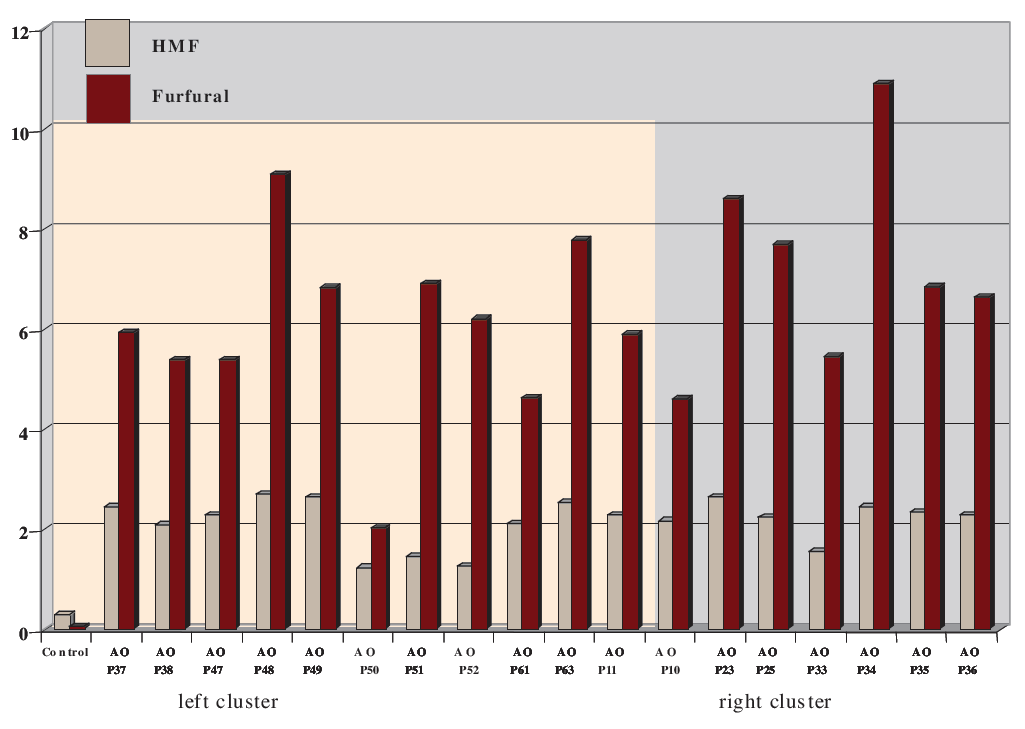 A glance at Figure 8 suggests that these toasted oak markers are indeed higher on the right hand side. On closer examination, only Profile 34 clearly stands out as being significantly toastier. The others are very much part of the entire group. It is important to note that Profile 34 is the only water bent toasting profile in the data set. The extent of the increase in Profile 34 suggests that its toasty flavor will be obvious in most wines; however, the same cannot be said for the others (unless the flavor intensity of the wine is low enough to allow the toast to show through). It was commented earlier that the location of each sample is dependent upon all of the chemicals measured in the wine. In some cases there may be samples that lie in a cluster that is apparently dominated by one or two particular compounds, but this can be misleading. With the exception of Profile 34 (which should demonstrate generous toast) virtually all of the profiles will provide an attractive toast flavor to most wines.

For this specific Cabernet Sauvignon from 2005 vintage, only smoke and fruit attributes were statistically significant from the sensory evaluation. Even though there were chemical differences among the wines for specific chemical markers, due to the complexity of wine and the interaction of hundreds of compounds in the solution, not all of the differences will be evident in a sensory evaluation. However, when the sensory evaluation was combined with a review of the toasting profiles, it was concluded that there is a strong correlation to the perception of a smoke character when the toasting profile exceed temperatures of 400 degrees Fahrenheit for extended periods of time. Definitely, the toasting process has a great influence in the final perception and chemical analysis of the wines aged in these barrels and more work is being done to find additional correlations between chemical analysis and sensory. Profile 52 was the toasting profile with the highest smoke perception and the lowest fruit perception. On the other side was the control with lowest smoke perception and highest fruit perception. These are the two extremes that helped open the distribution of samples in the space for all plots and charts. This is the first time a control wine, made in used barrels, was included in the analysis and it was very important. It is recommended that a control be used in all barrel experiments and resulting analysis.