Four new barrel profiles were developed with the aim of producing toastier versions of well established European style barrels. These include water bent as well as conventional fire toasted barrels.

The new barrels are styles based upon World Cooperage profiles 1, 2, 3, and 4, which have become very popular. Because these profiles have statistically validated time-temperature relationships with known flavors and well understood chemistry, they are ideal springboards to create the new barrels. Each profile was examined and modified in a way that could increase toast yet maintain the style of the existing barrel.

The results show that this aim was achieved. Thus:

Toasted oak characters have long been associated with wines matured in oak barrels. This is due mainly to the extraction of hemicelluloses caramelization compounds into the wine. These compounds are many in number and have descriptions that range from light cream and fudge through cream soda, toffee, dark coffee to burnt toast. Oak hemicellulose (often referred to as ‘wood sugar’) is very sensitive to heat and caramelizes quite rapidly. Which of the various descriptive terms just mentioned are found in a wine depends upon the amount of heat applied during barrel toasting.

Profiles 1 through 4 were developed several years ago to emulate popular European toasts that have a lower toasted oak impact. Since their introduction, all four profiles have been well received. Therefore, it seemed appropriate to enhance toast without otherwise altering the style of each barrel profile for wineries desiring more toasted oak character in Profiles 1 through 4.

The time-temperature curves of the four profiles were inspected to see how the level of toast might be increased. After consideration of how the oak’s chemistry might be selectively changed, four modified profiles were created. These new time-temperature curves (profiles 75 to 78) are shown beside the original versions (profiles 1 to 4) in Figure 1.

Figure 1. Comparison of original profiles and the toastier version 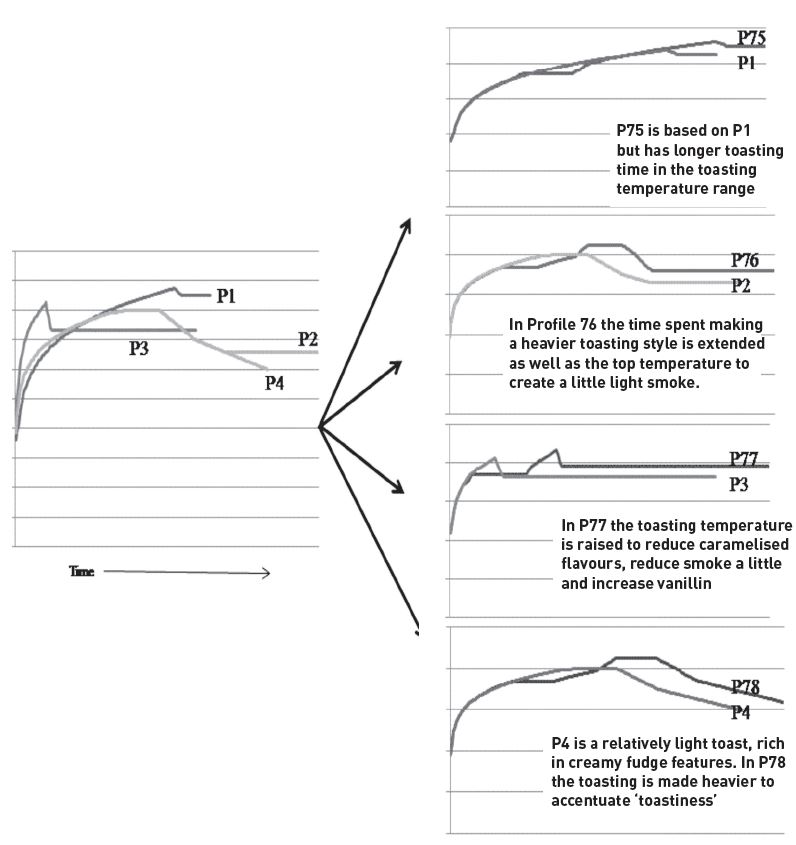 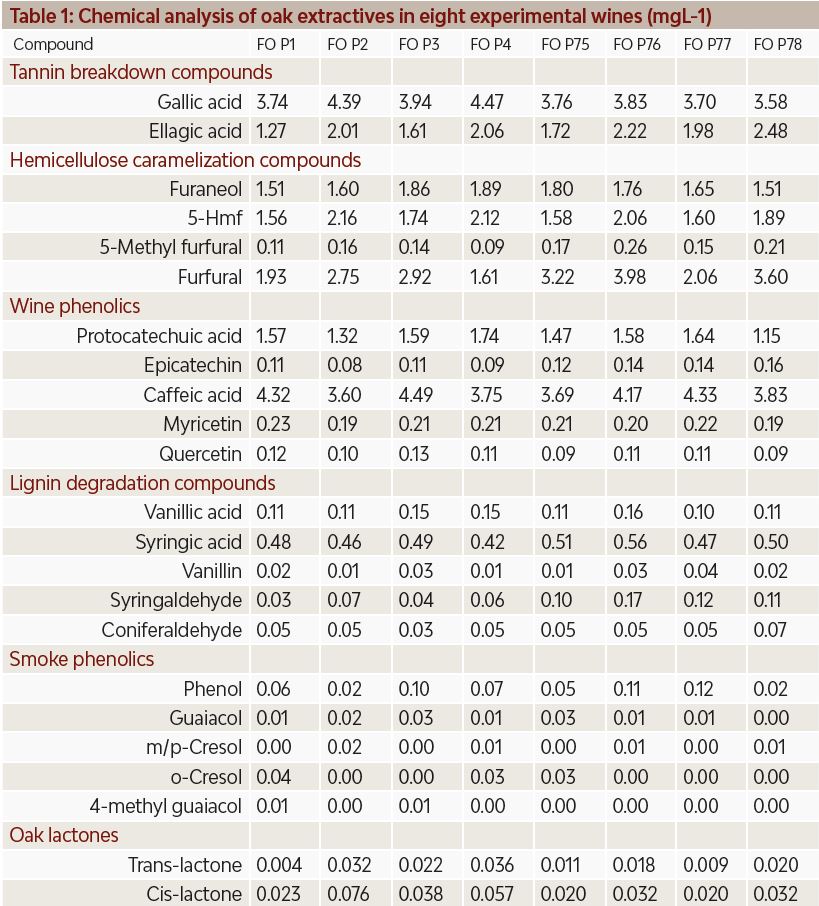 In this technique, each wine sample from the profiled barrels has its own location on the chart that depends upon how much of each extractive it contains. The samples are shown as small barrels. Some of the compounds that were analyzed are shown as black lines. It can be seen that two of the compounds that are closely associated with the newer, toastier barrels (i.e. they are ‘correlated with’ the group) are 5-methyl furfural and furfural. These two compounds are good markers for heavy toast flavors.

Figure 2. PCA evaluation of the major findings from Table 1 that included chemical analysis of the extractives from each profile

In every case the amount of energy used during toasting was increased to create more toast. However, the temperatures reached and the dwell times were different to create a different style of flavor. Thus, in creating Profile 75 from the style of Profile 1, the time spent in the highest of the hemicelluloses caramelization range was extended. The intention was to create more of the heavier toast flavors without any significant increase in vanillin or smoke phenolics.

Profile 76 was created from the style of Profile 2. In this case a heavier style of toast flavor was sought plus a hint of light aromatic smoke. This was achieved by raising the toasting temperature up to the mid-400’s Fahrenheit, then dropping back into the middle of the toasting region for an extended time.

In Profile 77 the toasting temperature was slightly raised to minimize smoke formation and enable a small increase in vanillin production. The existing Profile 4 gives relatively light toast compounds that tend to be rich in cream fudge flavors. It was modified to create Profile 78 in a manner intended to generate heavier toast flavors.

To the casual observer and experienced experimenters alike, it is difficult to see the extent of the similarities and differences between different barrels just by looking at the table. One technique used to simplify such data shown above is Principal Component Analysis (PCA). It captures essential features in two dimensions (e.g. as a chart). The main findings in this case are illustrated in Figure 2. 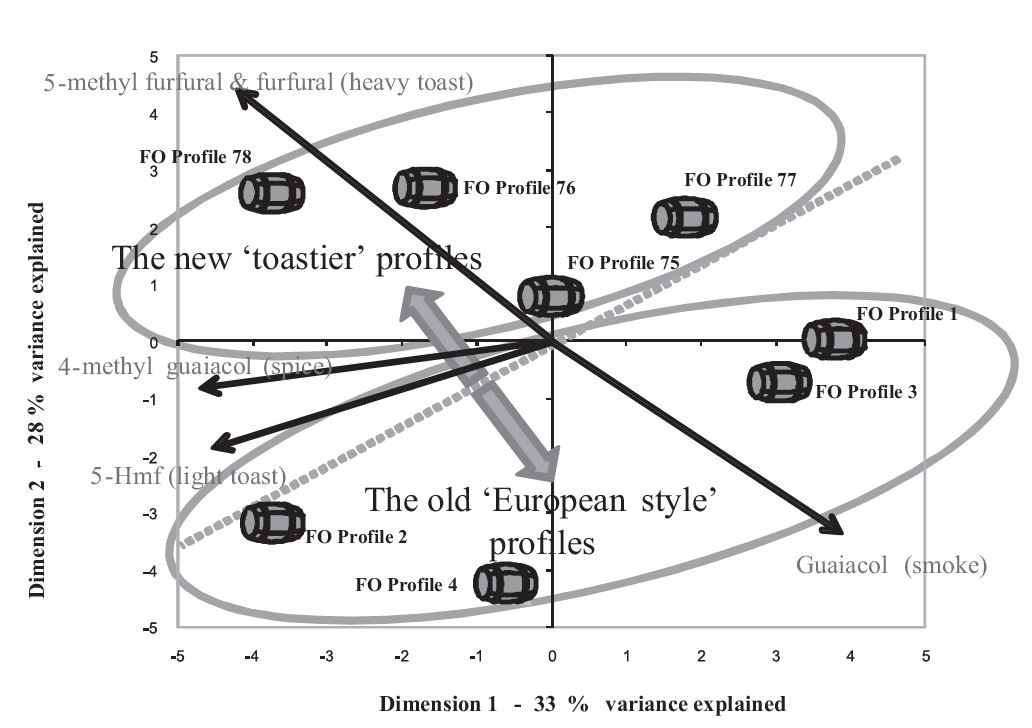 The role of these toast markers may be illustrated by comparing their amounts in each of the wines as a bar chart in Figure 3. With only the exceptions of profiles 3 and 77, 5-methyl furfural and furfural are approximately 50% higher in the new toastier profiles.

Vanillin is an important extractive in terms of flavor. However, it is not a toast flavor and it does not derive from wood sugar caramelization. 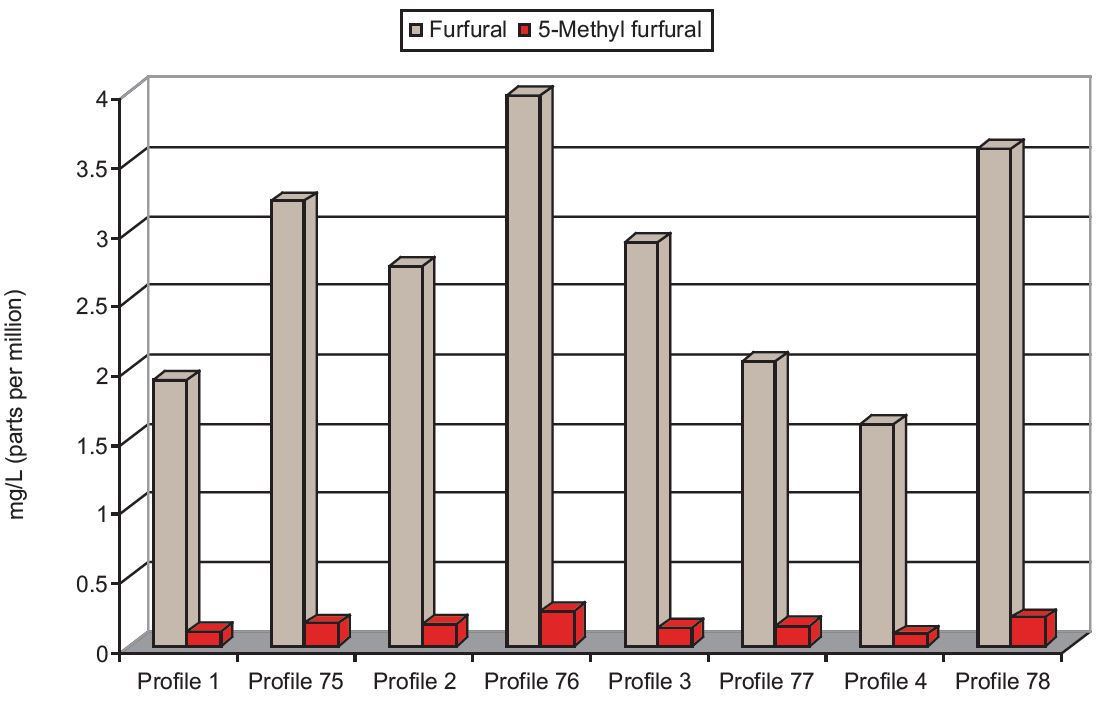 Figure 4. Vanillin levels in the eight samples of wine (mgL-1) 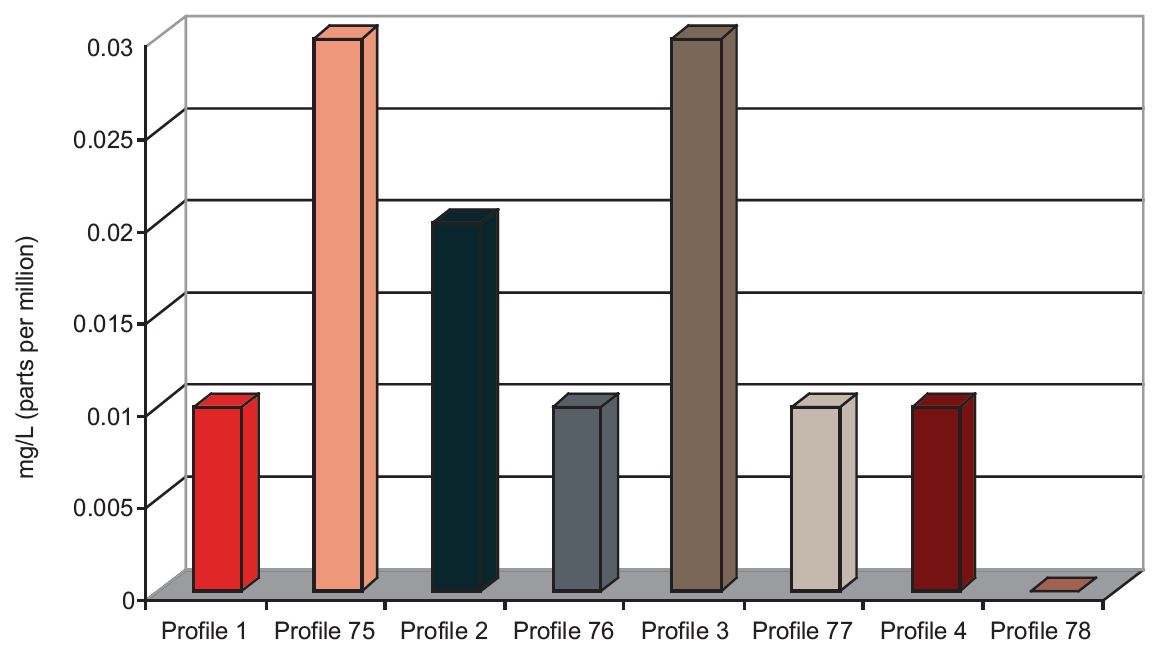 Toast may also possess some smoke features. However, in creating the new profiles, care was taken to avoid the higher smoke producing temperatures. This is demonstrated in Figure 5 which shows the levels of guaiacol in the wines. This compound has the lowest threshold in the steam volatile family, all of which are smoky. 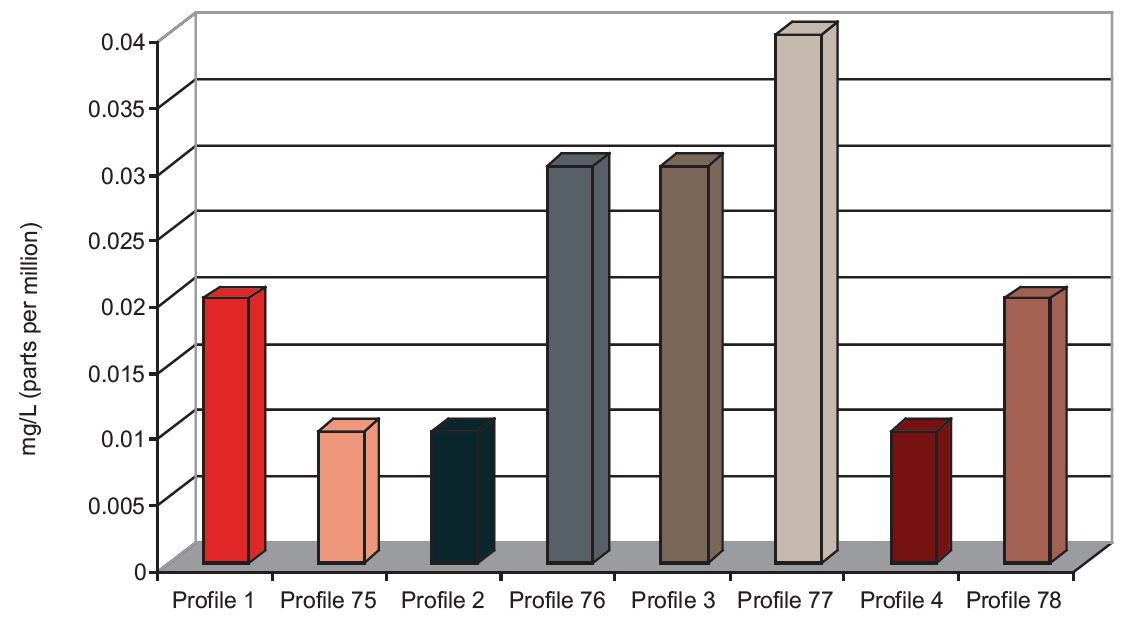 The sensory evaluation of this experiment was statistically significant at the 5% level only for the toast and smoke attributes. The LSD (Least Significant Difference) is shown in Table 2.

Even though the chemical analysis shows small amounts of guaiacol, the perception of smoke by humans is due to the combination of several chemical compounds formed during toasting at temperatures above 400ºF. As said before, guaiacol is one of the chemical markers used to evaluate the formation of steam volatile compounds. In Figure 5, Profile 3 and Profile 75 show the highest levels of guaiacol. In the LSD table for smoke, Profile 75 is perceived second highest in smoke but other factors are affecting the perception in the other profiles. 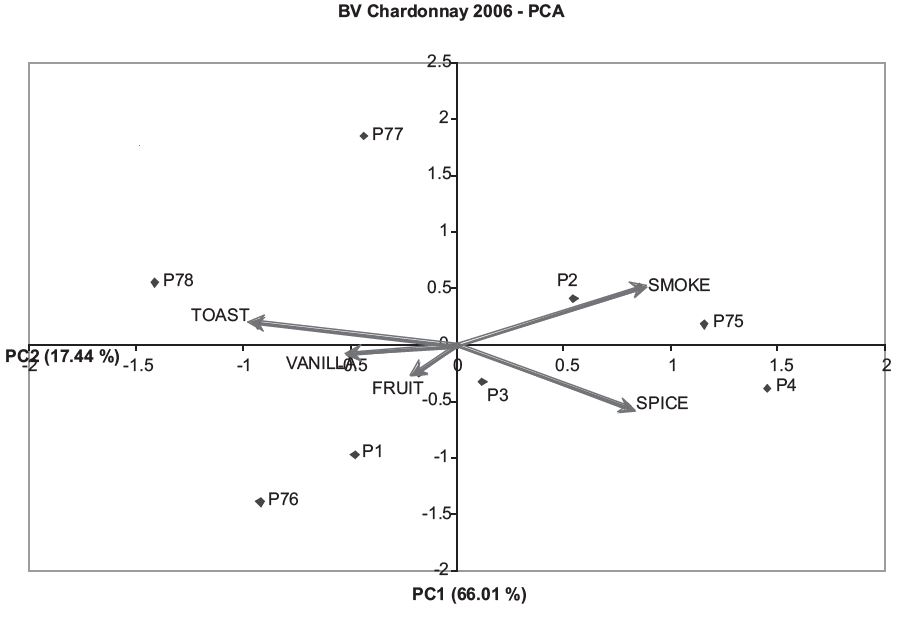 It is obvious in Figure 6 that profiles 1, 76, 77, and 78 are driven by toast. Profile 78 is the toastiest. The remaining barrels are driven by smoke. Profiles 4 and 75 are highest in smoke.

Partial Least Squares (PLS) analysis was conducted to find positive correlations between chemical and sensory results. In Figure 7, the outer ellipse is the unit-circle and indicates 100% of explained variance. The inner ellipse indicates 50% of explained variance. Thus, the area between the two ellipses in the Correlation Loading Plot explains from 50% to 100% of the variance. Next, we examine the variables included in this area. 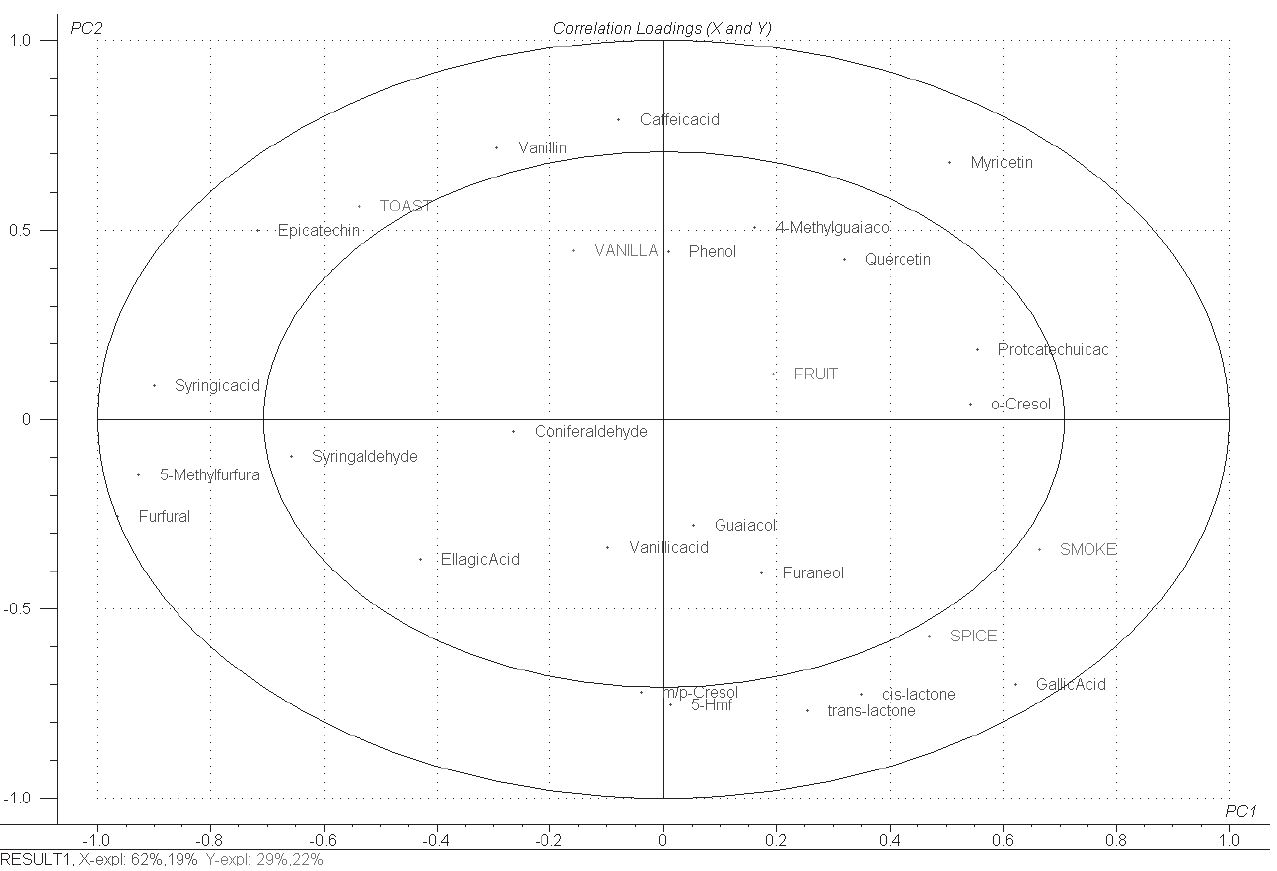 Figure 7 shows a positive correlation of the toast attribute with furfural, 5-methy furfural, and vanillin. Vanillin is a compound that often is correlated to the perception of toast, but it comes from lignin and not from hemicellulose as do furfural and 5-methyl furfural. Due to the heat treatment, all these compounds are formed at different levels depending on the temperature and time designed for the process. There is a positive correlation of m/p-cresol and 5-hydroxy methyl furfural with the smoke attribute. It is common to see an overlap of smoke and toast perception because the formation of the compounds responsible for both attributes happen at similar temperatures. It is not a surprise to see furfural or other compounds in the same group correlated to smoke and/or toast.

The last sensory test completed by the tasting panel was a preference test and because preference is very personal these results are only valid for this group.

Table 3 shows a variation between mouthfeel preference and overall preference. This demonstrates that aromatics and mouthfeel play a great role in the final decision. A wine can have nice bouquet and not be the preferred wine because it has more astringency than another wine. Profile 78 was in the middle of the road for mouthfeel preference, but ended as the least preferred overall. This may be because it was the toastiest of the group. Each wine is going to behave differently. The same profile could be the best for one wine and that winery’s style, yet could be the least preferred for another wine or winery.

It may be concluded, therefore, that the chemical analysis indicates that the desired changes to increase toast were achieved.

Sensory-wise, 75% of the toastier profiles were perceived to be toastier than the correspondent original profile. The objective of creating toastier versions of four well-accepted profiles was achieved. Using the knowledge of years of experience designing and toasting barrels made it possible to slightly modify the toasting curves of four barrel profiles to create four toastier versions, while respecting the stylistic intentions of the original profiles.