An investigation into the use of larger barrels was conducted on a plant scale by Sebastiani Vineyards. Over 50 barrels were used. Twenty barrels were the larger 65 gallon barrels and 38 barrels were the standard 59 gallon barrels. The wine was barrel fermented Chardonnay from Russian River Valley and Sonoma County. Sensory analysis on composite samples showed no difference in taste between the wines. The cost savings of larger barrels can be significant if the right infrastructure is in place to handle them.

In 1997 we joined with Golden State Vintners to determine if the slight surface-to-volume ratio increase of a 66 gallon barrel would noticeably affect the flavor in a finished wine. Since 1997, the product’s capacity has decreased one gallon to 65 gallons. Before testing the barrels it was thought that the difference in the 7 gallons would not make a significant difference in flavor, but it would contribute to big savings. The standard 59 gallon wine barrel produced by World Cooperage was constructed as normal. The 66 gallon barrel was produced by slightly increasing the bilge size and reducing the chime. The heading size remained the same. The major advantage of the larger barrel was cost. If 1,000 square feet is available to store barrels and two barrels are stored per square foot then storing 66 gallons per barrel compared to 59 gallons would save 47 barrels in total. If 10,000 square feet were available, then 470 barrels would be saved which costs approximately $8,000 (based on 1997 prices). 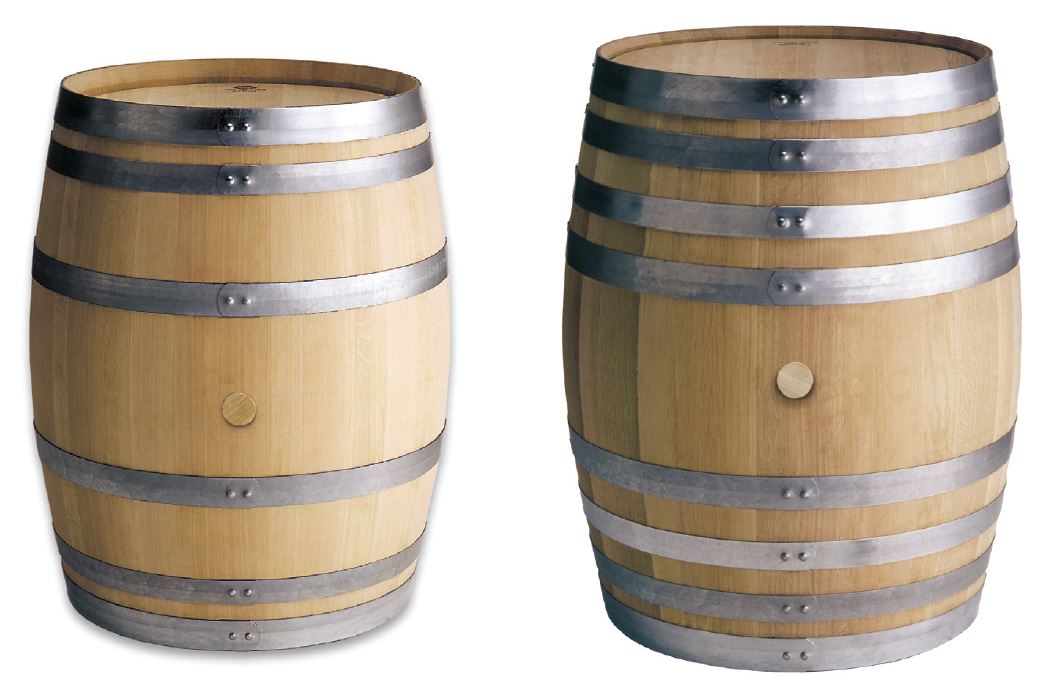 However, the tasting results from the 3rd International Barrel Symposium showed a clear preference for the smaller barrel. For French oak, 15% of the panel chose the 66 gallon barrel and 85% chose the 59 gallon barrel. American oak results were similar with 28% preferring the 66 gallon barrel and 62% preferring the 59 gallon. It was felt that the wine from the larger barrels tasted younger, thus it would be a trade off with time and space when choosing larger barrels.

We never like to base our decisions on one tasting no matter what size the panel, so Sebastiani Vineyards took on the challenge in 1999 to see if the sensory results were truly accurate.

1998 Sebastiani Vineyards Chardonnay, Soracco Vineyard (Russian River Valley) and Madrone Ranch (Sonoma Valley), was crushed on October 8, 1998. Prior to fermenting 1 lb/1000 gal bentonite was added for cold settling. The wine was fermented for seven days. The following was added to the racked tank prior to barrel filling: 1.5 lbs/1000 gal Prisse de Mousse (Gist Brocades), 4 lbs/1000 gal diammonium phosphate, and 1 lb/1000 gal Tastone 154 (Red Star yeast nutrient). Malolactic was carried out in barrel and the wine was topped and stirred January 1999. Sulphur dioxide correction and further topping and stirring were completed in February and April 1999.

Barrel lot sizes were 38 barrels for 59 gallon size and 20 barrels for 65 gallon size. All lots were treated and stored under identical conditions. The wine was aged sur lie for 200 days. The wines were tasted in May 1999. 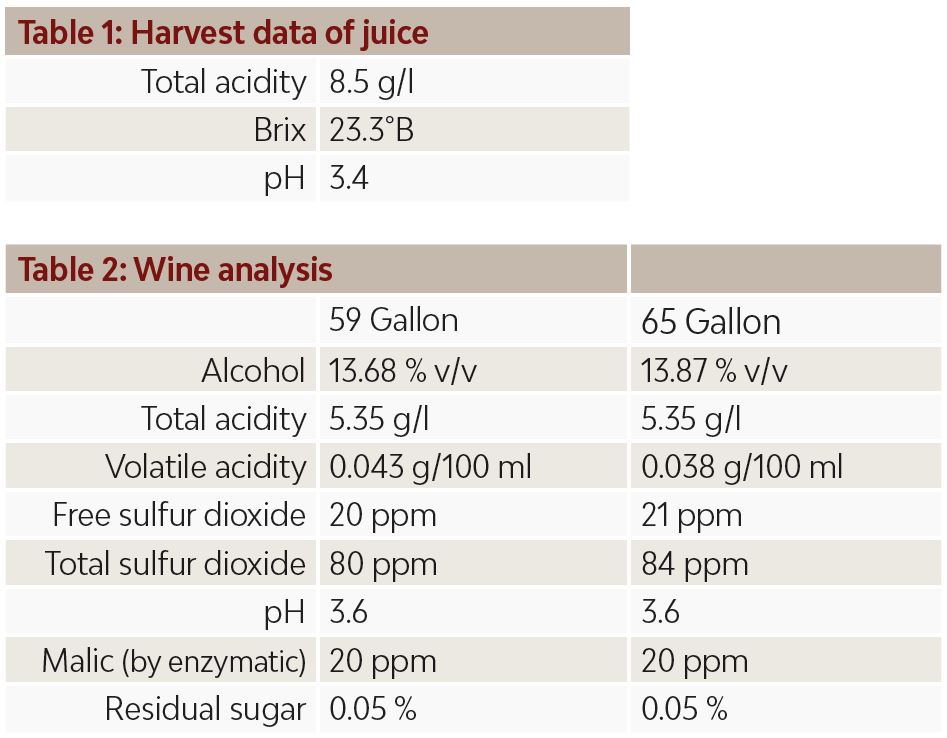 At the 4th International Barrel Symposium delegates tasted the composite wines. Table 3 gives a summary of the tasting. 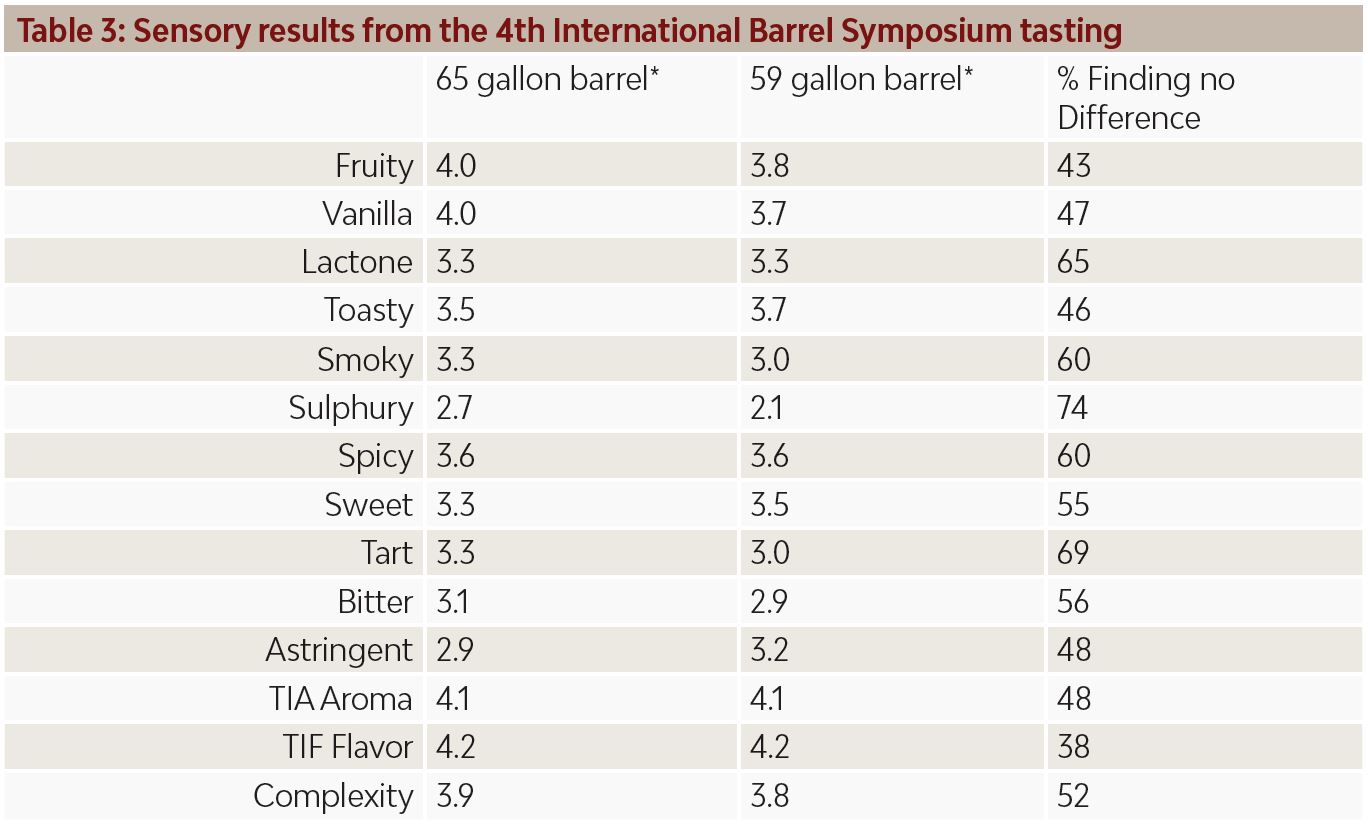 * Means score of those finding a difference between samples

This trial indicates no difference in flavor. When Golden State Vintners carried out the trial, they matured their stainless steel fermented Chardonnay for five months. In 1997 Sebastiani fermented their wine in barrel then left it for six and a half months. This longer maturation time could have influenced the results. More likely, the variation among barrels had more to do with the previous trial’s results. Sebastiani’s trial was much larger. Each wine was a composite of 20 or more barrels rather than four. Four is the minimum number of barrels to be used in a production size barrel trial. Thus, it would appear the larger barrels had little impact on the quality of barrel fermented Chardonnay.
Download PDF