The Effects of Time and Temperature on Wine Barrel Flavors
Tarapacá

The objective is to determine if the new Barrel Profiling technology improves consistency and provides flavor differences between four different toasting regimes. 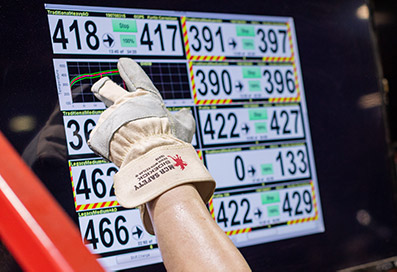 This experiment examines wine in four styles of barrels made using this new monitoring system. These include: 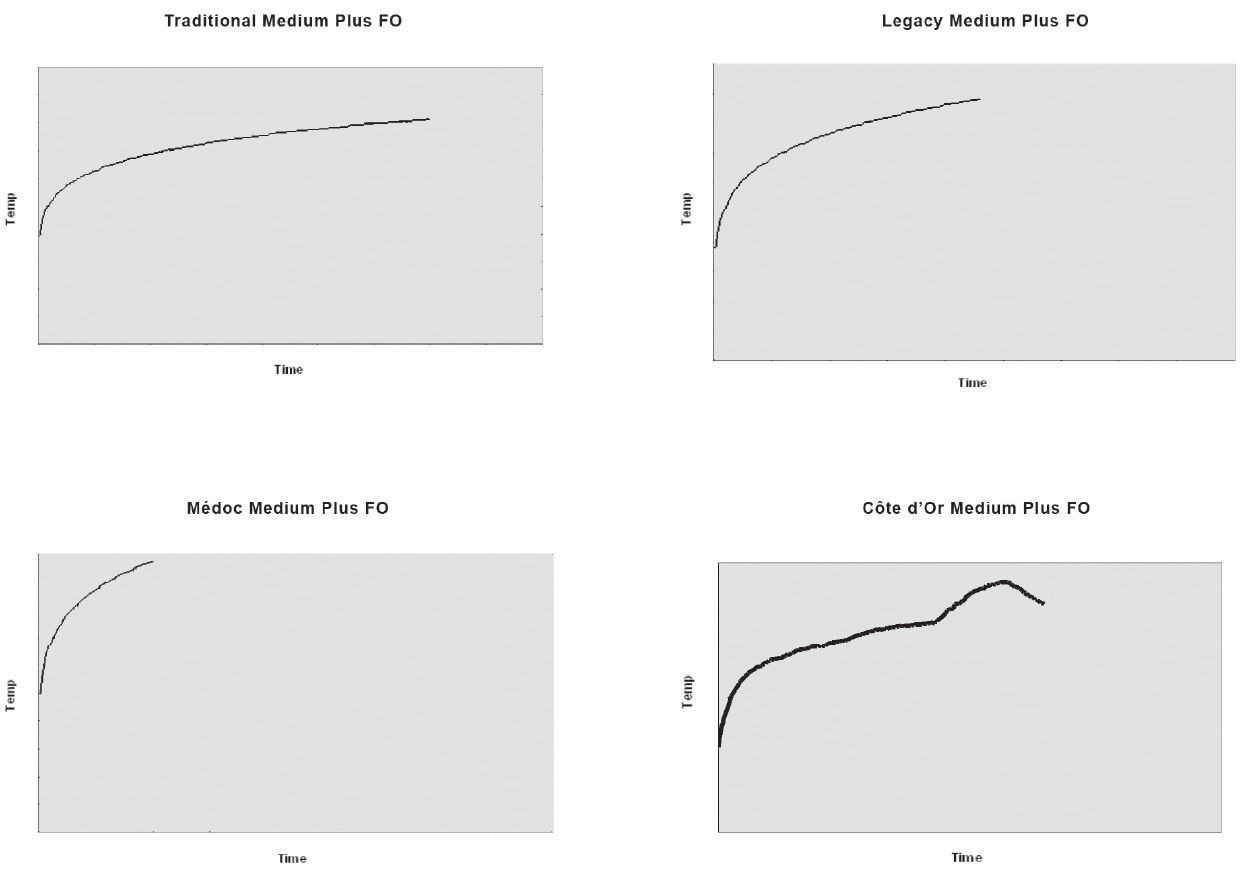 The World Cooperage Traditional barrel and the T.W. Boswell Legacy barrel are available in French, Eastern European, and American oak. The two barrels within the T.W. Boswell Appellation series— Côte d’Or and the Médoc—are both French oak. The Médoc is, by convention, made from olderseasoned oak because of its very short bending and toasting time.

This experiment encompasses seven wines. The entire group of wines is analyzed and presented in this document. Tarapacá Cabernet Sauvignon from Chile was aged in each of the above barrel types. The analytical differences are presented in this report.

Analysis of 25 oak extractives and wine phenolics is shown in Table 1. 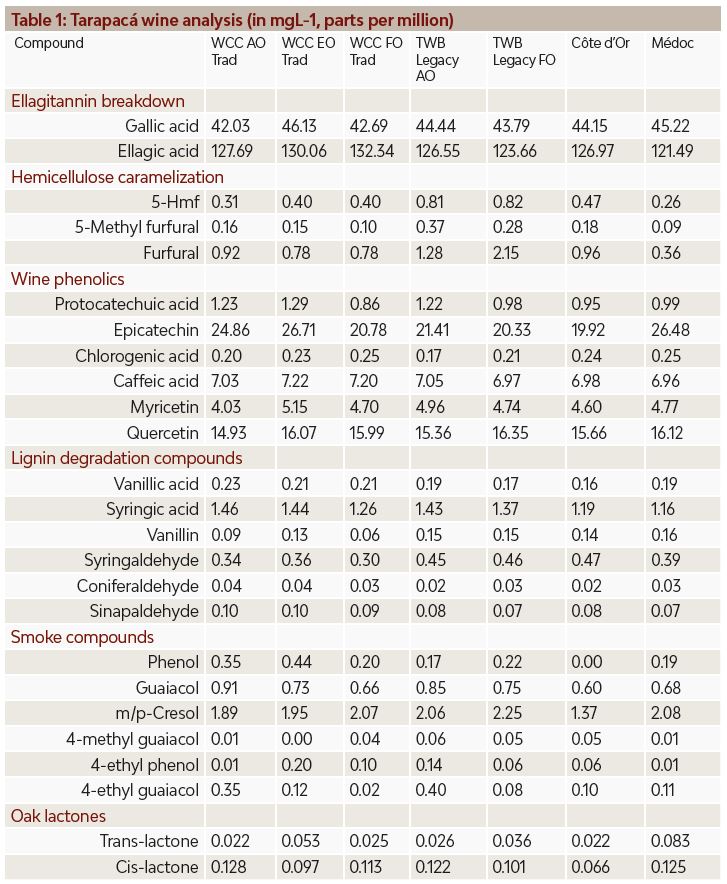 Inspection of the table shows few obvious differences between the samples (i.e. types of barrels). The furfural level (a marker for dark, “burnt” toast) is noticeably higher in the wines from the T.W. Boswell barrels. The Traditional barrels are lower in vanillin content, with the notable exception of the Traditional barrel made from Eastern European oak. However, when the data in Table 1 is more exhaustively evaluated, clear differences emerge. These are shown in 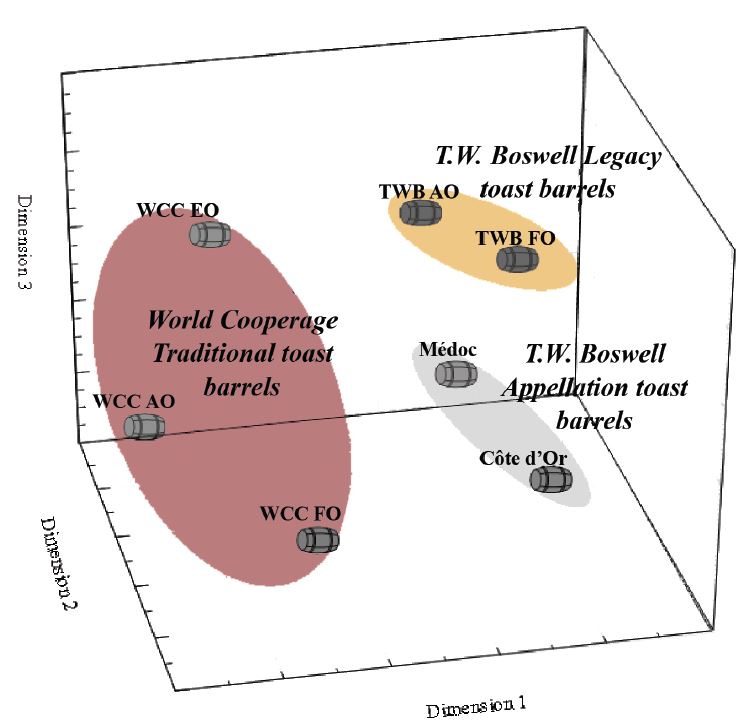 Figure 1 shows that the barrel types cluster together, irrespective of the type of wood. Thus the Traditional barrels can be seen on the left side, the Legacy barrels (French and American oak) on the upper right, and the Côte d’Or and Médoc on the lower right. 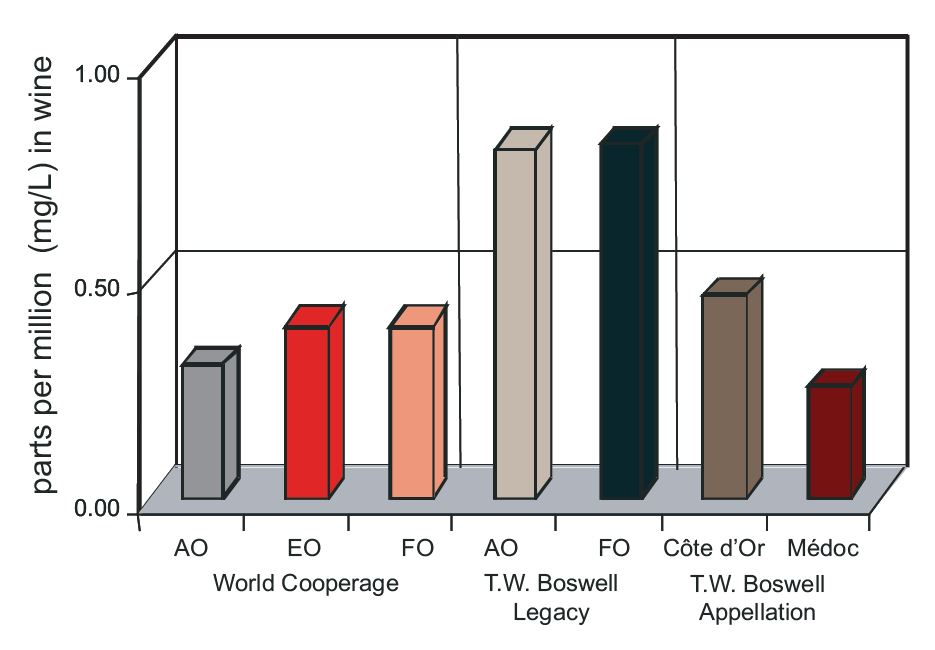 Interrogation of these findings showed which analytical differences existed and how they contributed to the differences. The light creamy toasty character represented by 5-hydroxymethyl furfural (Hmf) is known to be a feature of the Legacy barrels and Figure 2 shows clear differences. The Côte d’Or barrel, which also has toasty features, comes well behind with the third highest level, while the Médoc, not intended to give high levels of this type of toastiness, has the lowest levels of all.

Figure 3 shows another aspect of toastiness, the furfural levels that are indicative of darker, more bitter toast. 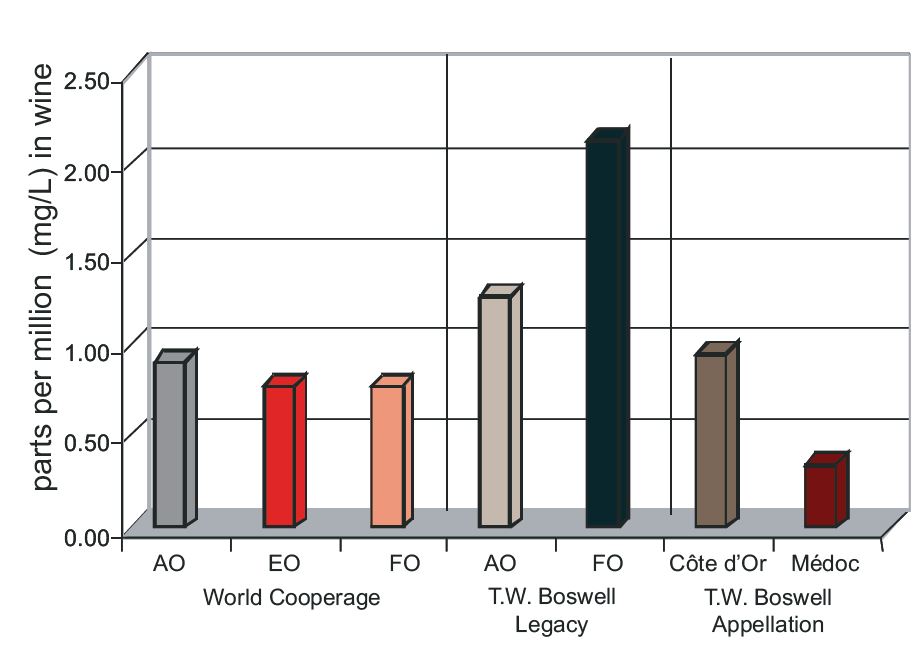 In this case, the French oak Legacy barrel had by far the highest levels, with little difference between the other wines.

Figure 4 illustrates the vanillin levels deriving from the barrels. The role of vanillin in the oakwine interaction and its flavor complexing effect is the single most important contribution from the barrel. 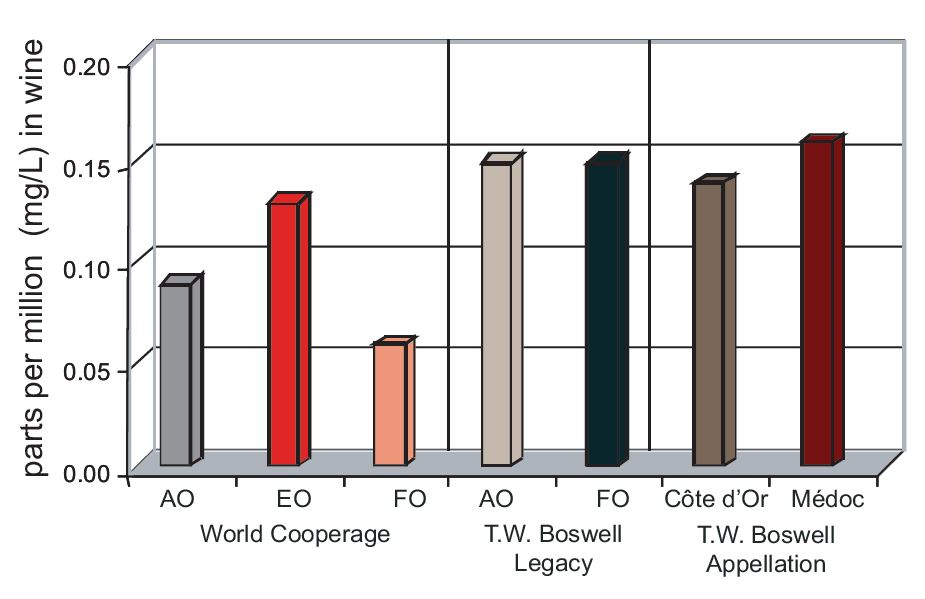 Figure 4. Vanillin content (in mgL-1, parts per million) in the Tarapacá Cabernet Sauvignon

The Médoc was designed to generate the highest, early extracting levels of vanillin. This is clearly demonstrated in the Tarapacá experiment. This is followed closely by both the American and French oak Legacy barrels, then surprisingly, by the Côte d’Or. In the Traditional barrels, the highest vanillin occurred in the Eastern European oak, perhaps due to its greater seasoned age. Normally one would expect the American oak to generate more free vanillin than European oak.

The other planned feature of the Médoc barrel was to retain complex tannins aimed at the development of structure in reserve style wines. This feature, the ellagic acid levels, is shown in Figure 5. This aspect does, however, require some explanation. Large oak tannin structures (ellagitannins) are not found per se in oak aged wines. It is believed that these change their composition in wine; Puech et al have suggested that they form ketals (Puech, J-L., C. Mertz, V. Michon, C. La Guenerve, T. Doco, C. Herve du Penhoat, Evolution of Castalagin and Vescalagin in Ethanol Solutions, Identification of New Derivatives, J. Agric. Fd. Chem. 47:2060-2066, 1999). The end of the chain in ellagitannin breakdown is the creation of ellagic acid. Thus, if the source oak is the same or very similar it may be inferred that the lower the level of free ellagic acid, the higher the amount of larger ellagitanin structures.

Figure 5. Free ellagic content (in mgL-1, parts per million) in the Tarapacá wines 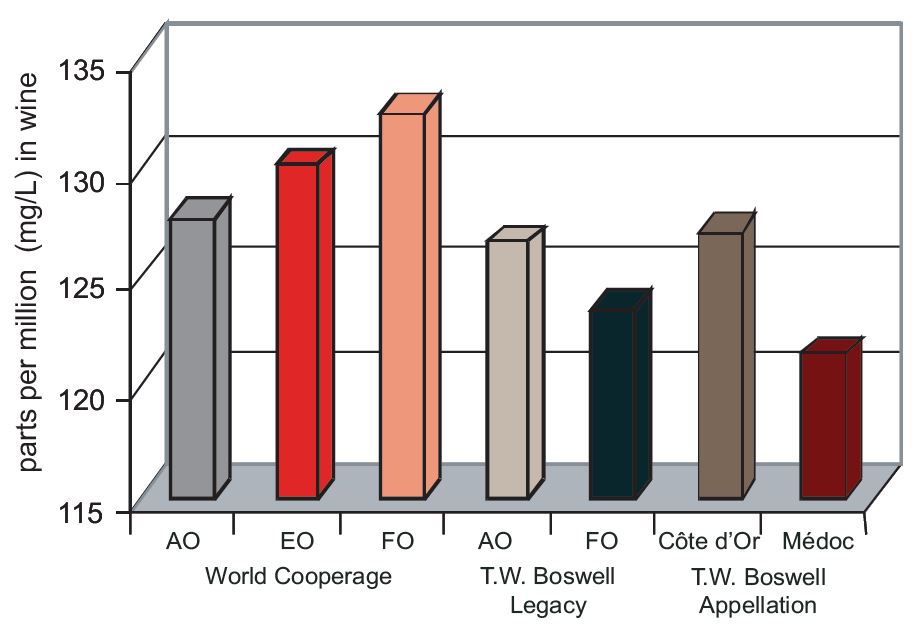 Inspection of Figure 5 illustrates how the Médoc barrel provided the lowest free ellagic acid (hence highest ellagitannin). The highest free ellagic acid was in wine from the French oak Traditional toasted barrel. This barrel uses oak from similar reserves but undergoes the greatest time period for tannin destruction during toasting. French oak possesses up to ten times more tannin than American oak, but such a wide difference is rarely seen in oak aged wine.

Oak lactones have low odor and flavor thresholds, notably the cis isomer with its coconut flavor in higher concentrations and harsh aggressive nature at lower levels. Oak lactones generally occur at up to 10x higher levels in wine from American oak. However this is not always the case; the Tarapacá wine provided one such example. Figure 6 shows the ratio of the cis to trans isomer. 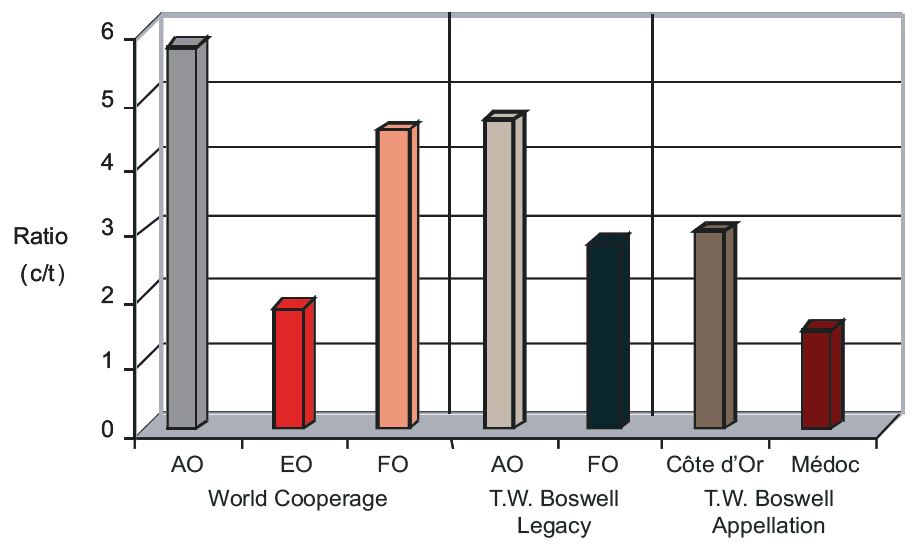 Following the rationale explained above it should be possible, in theory, to distinguish between the two types of oak from a ratio. The American oak should give values close to 10 and French oak values around 1. But in fact, Figure 6 shows this is simply not the case for these wines. The highest two ratios do occur with American oak, but the ratios from the Traditional French oak, Legacy French oak and Côte d’Or are all well above the 1:1 ratio. The low ratios experienced for the American oak are still difficult to explain. Much still remains to be learned about lactone formation in barrel making and its subsequent uptake into wine. The low (i.e. attractive) ratios observed here might well be a tribute to the skills of the coopers and winemakers involved.

World Cooperage Barrel Profiling technology definitely provides more consistency from the production standpoint and a broader spectrum of choices for the winemaker. So, depending on the grape variety and winemaking style, different barrel profiles can be chosen to meet the winemaking goals during barrel ageing.