There are strongly held views on how to prepare a barrel for filling. The use of water is strongly opposed by some, while others enthusiastically adopt it. Some steam the barrel for three to four minutes, while others quick-rinse with cold water. Certain views take cost into consideration as well as flavor consequences. Each winery’s environment, such as water availability and labor cost, also weighs on the method used.

Ideally, the simplest method is to fill the barrel with wine upon receipt, but oak expands and contracts from the time the barrel is built to the moment it’s filled with wine. Transportation from the cooperage to the winery can be under a wide range of environmental conditions. Additionally, the wine is not always available to fill directly into the barrel. These factors can cause leaking barrels in the cellar.

The results will be further discussed by a panel consisting of winemakers from a variety of winery environments. Current trends being used by wineries around the world today, such as ozone and climate controlled warehouses, will be discussed. Solutions will be applicable to small or large wineries with elaborate routines.

Samples of wine were taken after three and six months in barrel. Chemical analysis was performed on each individual barrel, with each set containing 10 barrels. Figure 1 is a principal components plot of the samples after three months wood maturation. 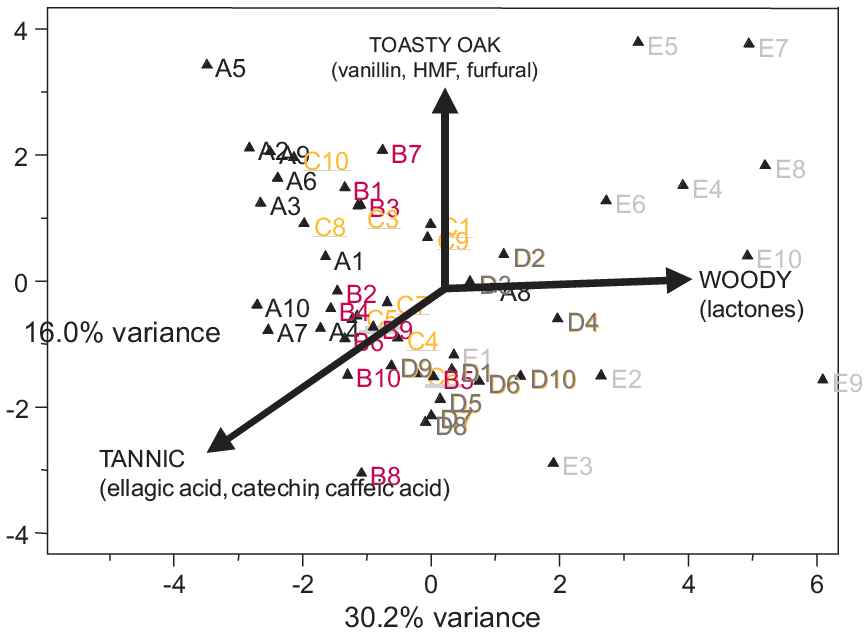 Only the pretreatment involving hot water soak for 24 hours showed a particularly significant effect. This is shown in Figure 1 by all the E samples (the hot water soak) being plotted much farther to the right than all the others. This wine had high levels of lactones, a particularly unwanted effect. The barrels with no pretreatment, sample A, were slightly higher in oak tannins. The compounds for “toastiness” were not associated with any particular set.

The wine was sampled again after six months in barrel. Principal components analysis was again performed on all the results. However, this plot did not show any significant grouping (results not shown). Univariate analysis was carried out to ensure no significant differences could be identified dependent on the barrel handling practice. ANOVA statistics found some difference in the levels of catechin, and cis and trans oak lactones. The wine from barrels with no pretreatment contained the least catechin. There was no difference in the levels of catechin amongst the other samples. This wine also contained significantly more trans lactone than wines made in the barrels rinsed for five minutes with hot water, cold water filled overnight, and filled with 180ºF water for 24 hours. It had slightly more trans lactone than the wine from barrels filled with five gallons hot water and bunged for two hours. However, these same samples from the barrels with no pretreatment were lowest in the cis form of the lactone. No other significant differences were apparent amongst the other samples.

Most notable in both samplings was the caramelized sugars results. Caramelized sugars, like hydroxymethyl furfural, furfural and 5-methyl furfural, are formed on the surface of the barrel during toasting and are the first compounds extracted during maturation. They are nearly exhausted from the barrel after the first fill. One may believe that a water wash, particularly a water fill and soak, would significantly reduce the availability of these important flavor compounds; however, no evidence of this occurring was found in this study.

The method chosen for preparing barrels will be dependent on water availability, heating capacity, cost, and affect on flavor. This experiment has shown that most water treatments for checking barrel soundness will not significantly alter the final flavor of the wine. It does not appear that any oak extract is lost even in the most extreme methods of prepping, although there is a small risk that cis lactone will be formed in some water pretreatments. This risk must be balanced with the risk of losing valuable wine if the barrel is untested for leaks before filling.

Which barrel pre-treatment do you use?