Six American oak barrels were toasted using hickory, mesquite, French oak and American oak then filled with Chardonnay. Pinot Noir was also used. A sensory panel assessed the wine to determine if the species of wood used to toast a barrel can significantly impact wine flavor. Initially the strong aroma of hickory and mesquite wood did affect flavor. However this impact diminished over time with only slight differences in aroma detectable after two months in bottle.

Golden State Vintners crushed Chardonnay grapes from the Napa Valley in September 1998. Prior to fermenting, 2 lbs/1000 gallons DAP was added. The juice was fermented with Premier Cuvee yeast, 1 lbs/1000 gal and fermentation lasted 12 days. At the end of fermentation MCW malolactic culture was added.

American oak barrels were toasted with hickory, mesquite, French oak or American oak pieces to a medium plus specification. Six barrels of each type were produced. The wine matured in barrel for 153 days. 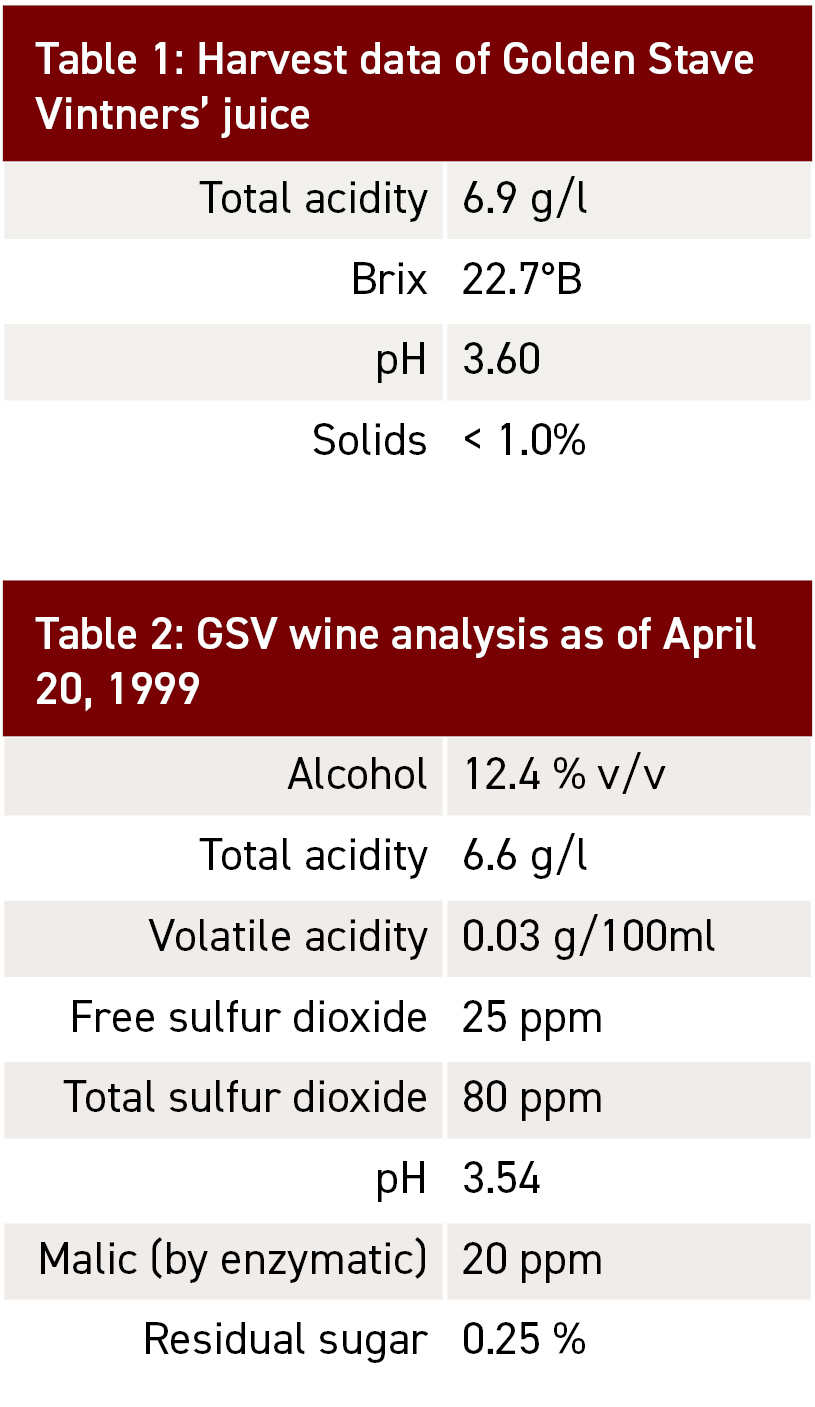 Samples of wine from Rodney Strong were analyzed for smoke phenolics and oak extractives. The results are presented in Table 3. 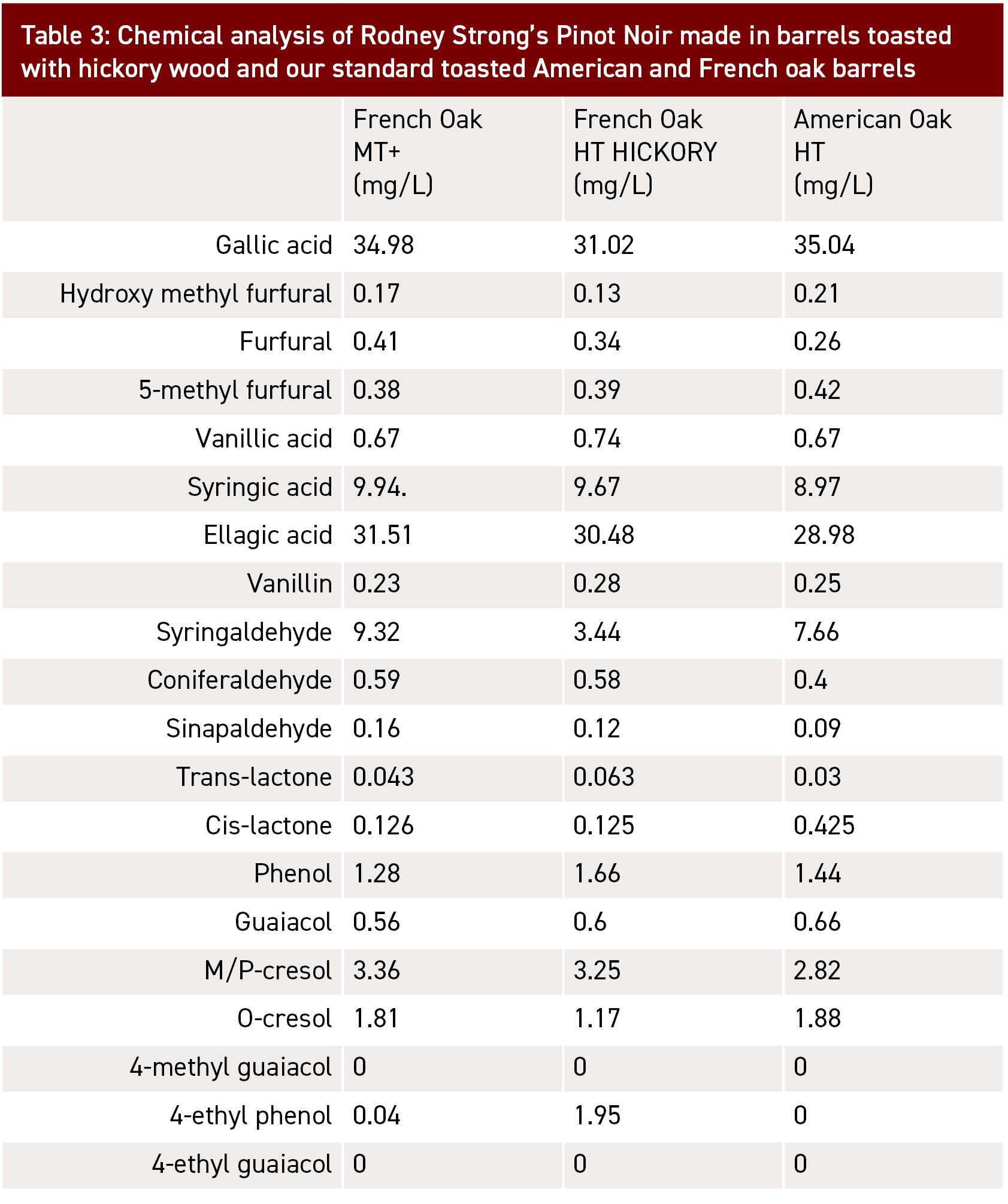 Figure 1 shows the total and individual smoke components present in the wines. The hickory wine had considerably more total smoke compounds, in particular 4-ethyl phenol and phenol. Phenol itself is not very aromatic; however, it is indicative of smoke compounds being present. It is normally higher in heavy toast barrels. Ethyl phenol has been identified as causing sweaty, horsey off-odors in wine. It can be produced during the toasting of wood. It can also be a fermentation by-product of saccharomyces, the standard wine yeast. At high concentrations it is normally attributed to the growth of brettanomyces, a wild yeast. Hickory smoke could contain a higher proportion of 4-ethyl phenol than American oak smoke. However, any differences due to fermentation should be tested further to confirm the only difference between the sets was the toasting method.
Figure 1: Smoke compounds present in Pinot Noir 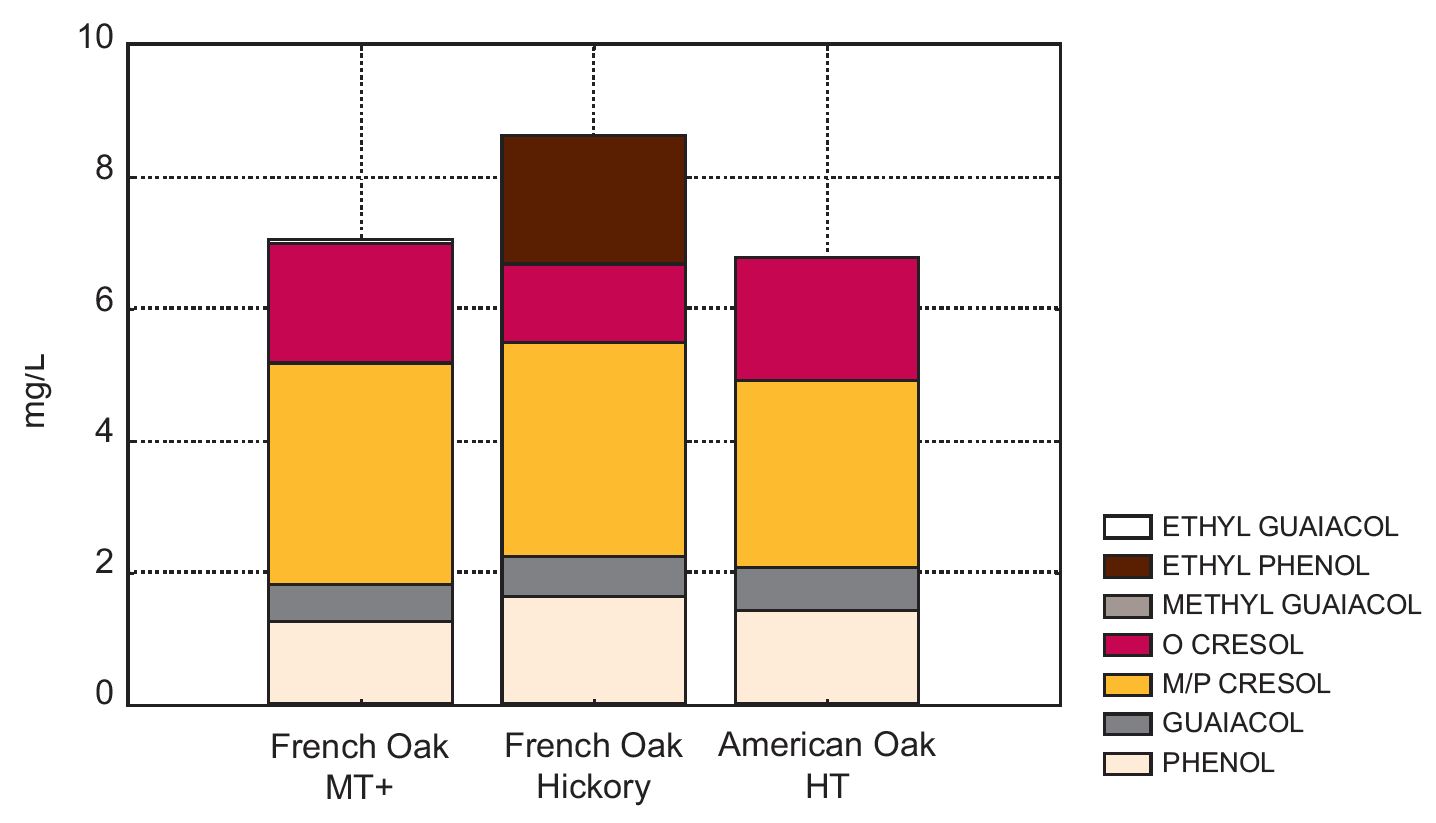 Sensory analysis was carried out on the Chardonnay wine from Golden State Vintners. Table 4 shows the preference scores and sensory notes from this tasting.

Sensory analysis indicated that both the hickory and mesquite smoked barrels produced wine with a distinct smoky character. Some panelists liked the hickory effect but few were partial to the mesquite. The wood overpowered the fruit and a definite bitterness was found in the finish.

At the 4th International Barrel Symposium delegates tasted the composite wines. Quantitative descriptive analysis showed no difference in smokiness. It appears the impact of wood type used to heat barrels during toasting is low and may diminish with time. Table 5 gives the preference scores of the tasting. 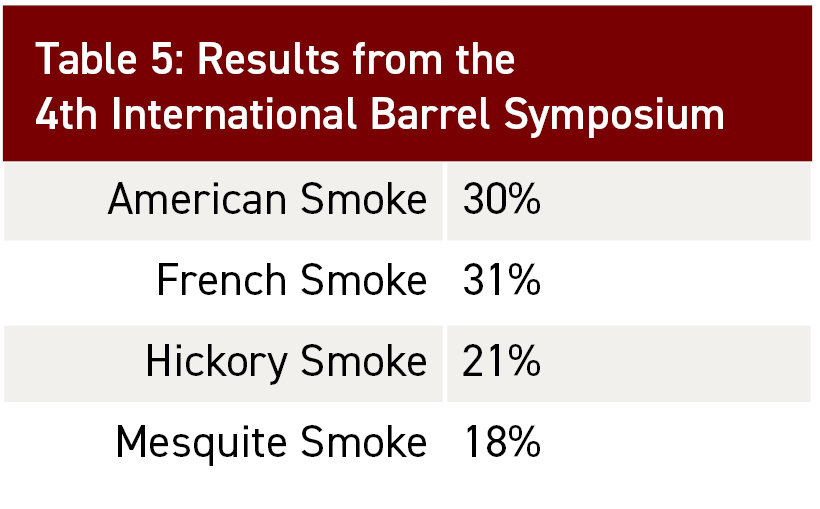 We used exotic woods to toast American oak barrels to determine their effect on wine flavor. Initially, the hickory and mesquite woods produced quite distinctive wines, however the flavor impact appeared to diminish over time. The mesquite smoked sample was the least preferred. It was identified as the most different. There was no difference in preference between the American and French smoked samples.