Five French oak profiles that performed well with other varietals and had specific characteristics to complement Pinot noir wines were selected. These profiles were profiles 1, 27, 58, 78, and 80. Profiles 1, 27, and 80 are based on Burgundy style toasting and have been used for Chardonnay. Profiles 58 and 78 have been used in Merlot and other varietals when more toast is desired. The selection of these five French oak profiles will cover the different Pinot noir styles worldwide.

Two wineries from different wine regions of California were selected to do barrel experiments with this varietal. Beaulieu Vineyard aged a 2006 Pinot noir from Carneros for 6.5 months and Sea Smoke Cellars aged a 2006 Pinot noir from Santa Rita Hills for 5 months. Due to the difference of 1.5 months in the ageing period, different growing regions, and winemaking styles, the wines from Beaulieu Vineyard had higher concentrations of furfural than the wines from Sea Smoke. The other compounds extracted from oak were at low levels in both experiments with slight differences between wines.

While the elevation of wine aroma and flavor by oak is sought after in most wines for the complexity and increase in impact that it brings, no wine is more demanding or ‘fussy’ than Pinot noir. In the two experiments presented, an effort was made to find profiles that particularly suited Pinot noir and to learn more about the underlying chemistry and sensory relationships.

The experiments performed by Beaulieu Vineyard and Sea Smoke used the same range of profiles. These were five in number and were French oak profiles 1, 27, 58, 78, and 80, the latter being a modification of profile 27. They are illustrated in Figure 1.

Figure 1. The profiles used in the Pinot noir experiment 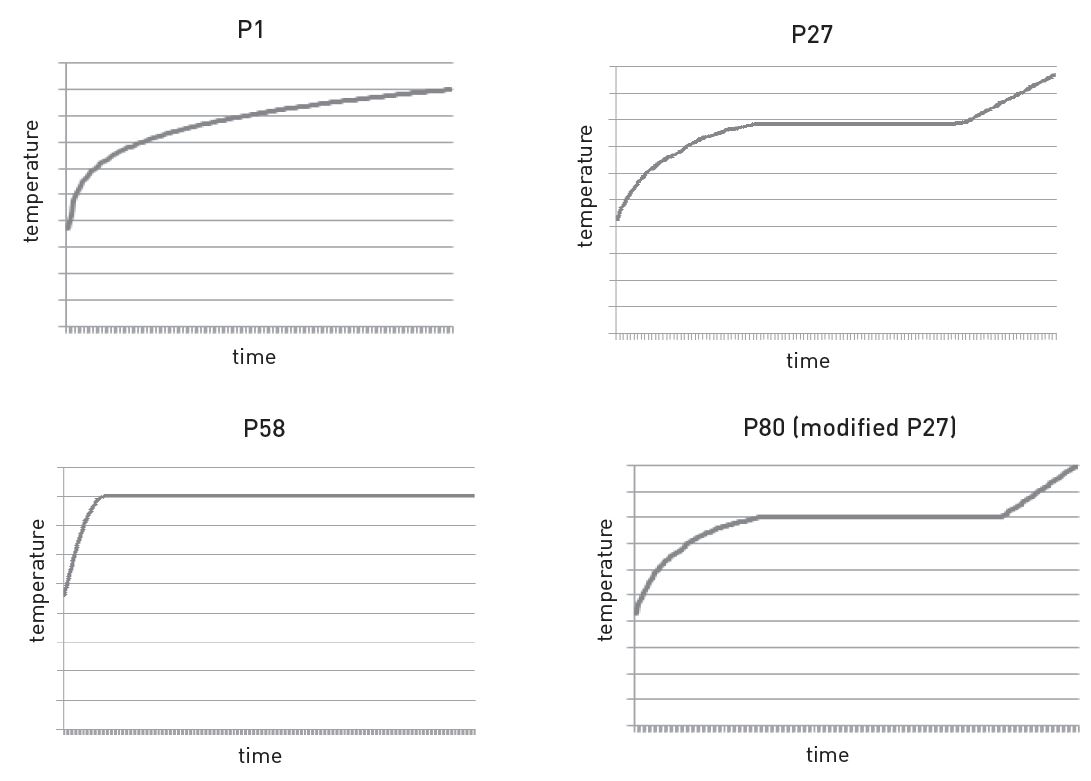 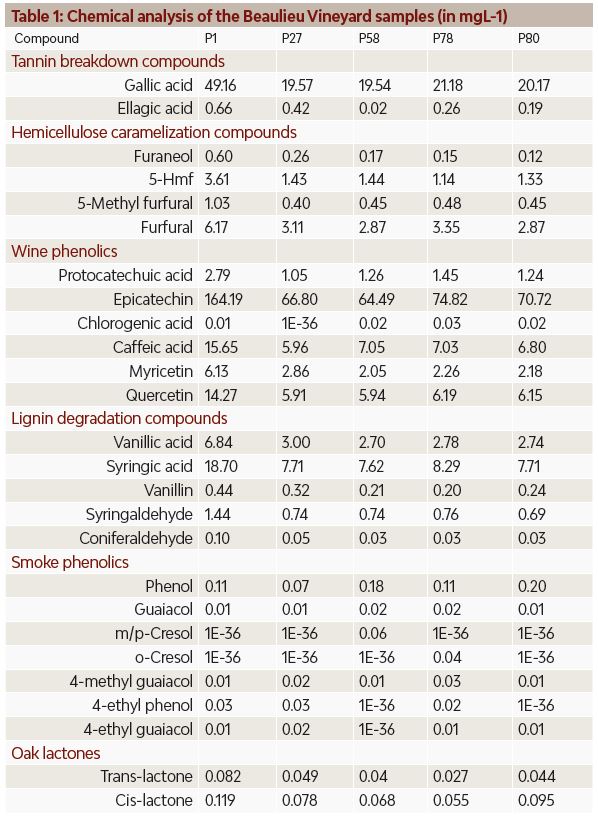 The technique of Principal Components Analysis (PCA) was used to simplify the data shown by capturing its essential features in two dimensions (e.g. as a chart) and is shown in Figure 2. In this technique, each sample has its own location on the chart depending upon how much of each extractive it contains. The samples are shown as small barrels. Some of the compounds that were analyzed are shown as black arrows (vectors).

Figure 2. PCA evaluation of the major findings from Table 1, chemical analysis of the extractives from each profile 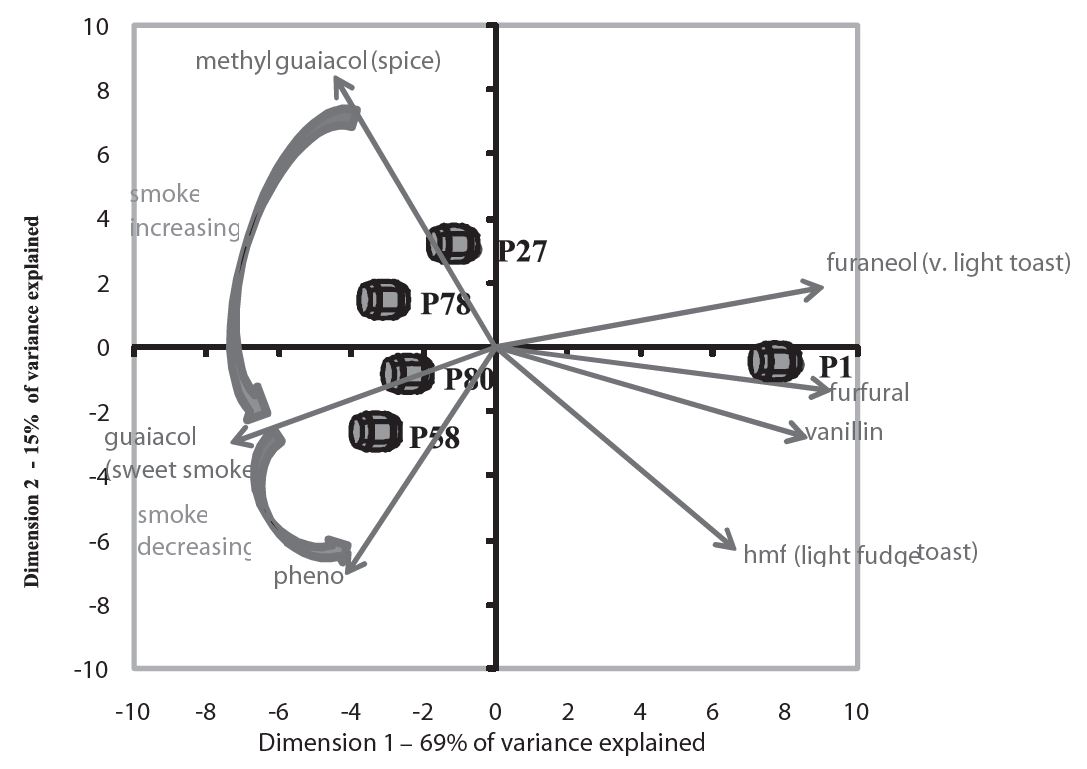 Inspection of Figure 2 shows that profile 1, the oldest and the only water bent profile, is more distant from the newer ones. Profiles 27 to 80 are close together and therefore show a higher degree of similarity. The newer profiles form a fairly discrete group in the left two quadrants. Profile 80, which was a modified profile 27, is slightly higher in smoke due to the additional toasting time. The broad arrows in the left quadrants show how the profiles develop from spice through sweet smoke before the smoke starts to dissipate.

Part 2. The Sea Smoke Pinot Noir Experiment
As already mentioned, the experiments conducted by Beaulieu Vineyard and Sea Smoke used the same range of profiles. These were five in number and were profiles 1, 27, 58, 78, and 80.

It will also be shown that there are clear similarities between the results of the two experiments, whilst each retains subtle differences that contribute to the uniqueness of the two wines.

The results of the chemical analysis are shown in Table 2. Results are in mgL-1, i.e. parts per million in the wine on an ‘as-is’ basis. 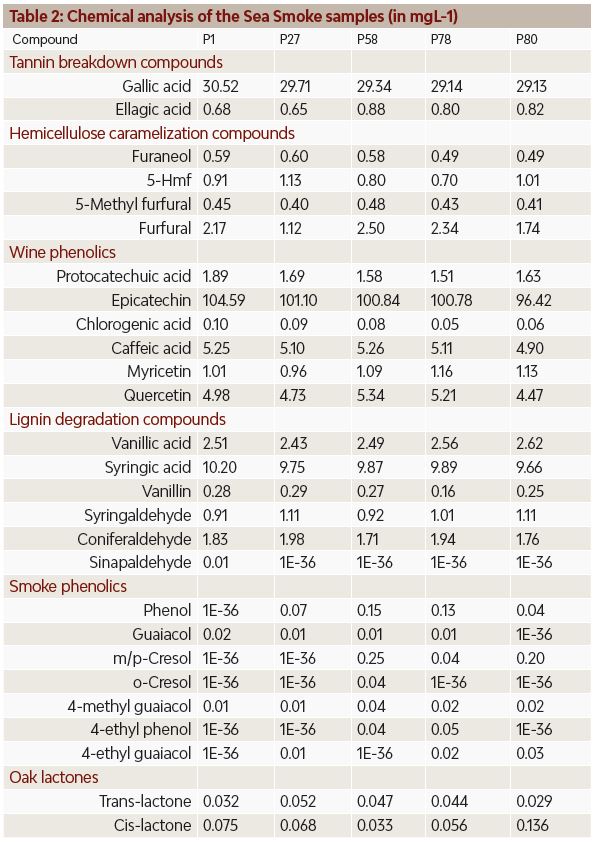 Once again, Principal Components Analysis (PCA) was used to simplify the data shown by capturing its essential features in two dimensions (e.g. as a chart) which is shown in Figure 6. In this technique each sample (wines from the profiled barrels) has its own location on the chart, depending upon how much of each extractive it contains. The samples are shown as small barrels. Some of the compounds that were analyzed are shown as black arrows.

Figure 3. PCA evaluation of the major findings from Table 2, chemical analysis of the extractives from each profile 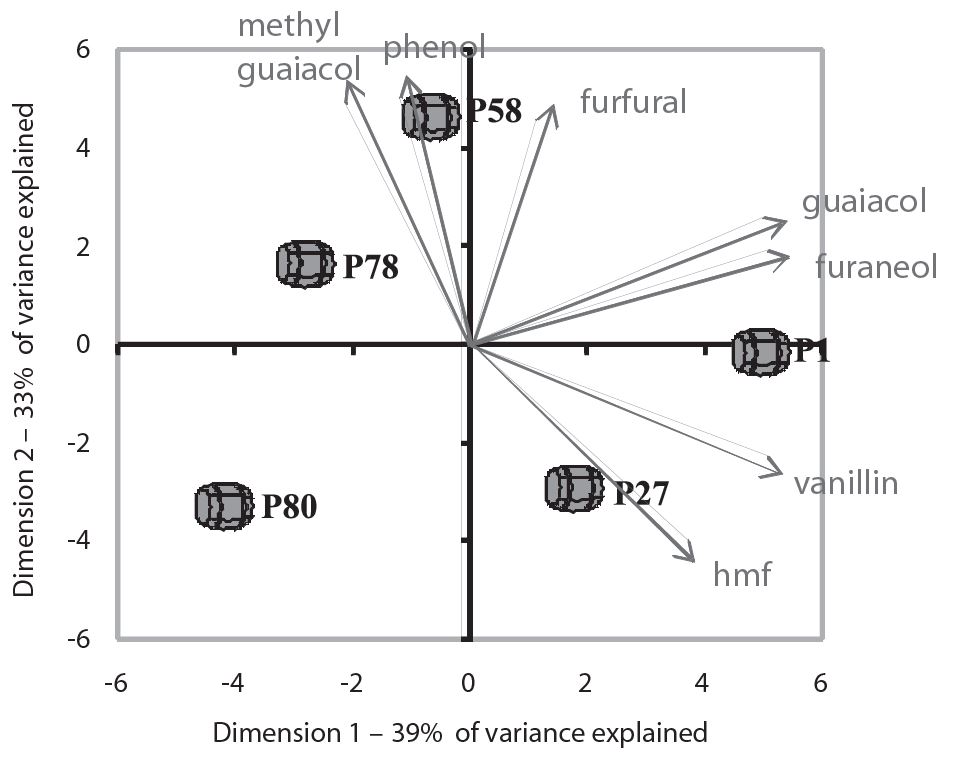 Part 3. Data Comparison of Sea Smoke and Beaulieu Vineyard Chemical Analysis
Because the Sea Smoke Pinot noir had only 5 months of oak contact time and the Beaulieu Vineyard had 6.5 months, it was expected to see less concentration of chemical compounds in the Sea Smoke wine. The following bar charts for the main chemical markers have been plotted putting each profile from each winery side by side.

In Figure 4, each profile has been labeled with the initials of the winery prior to the profile number. The largest difference in furfural is observed in profile 1. Beaulieu Vineyard’s profile 1 has the highest level of furfural of all the samples and overall the level of furfural is always lower in the Sea Smoke wine. The most significant differences between experiments for furfural are for profiles 1 and 27. The remaining profiles show only slightly lower levels in the Sea Smoke Pinot noir. 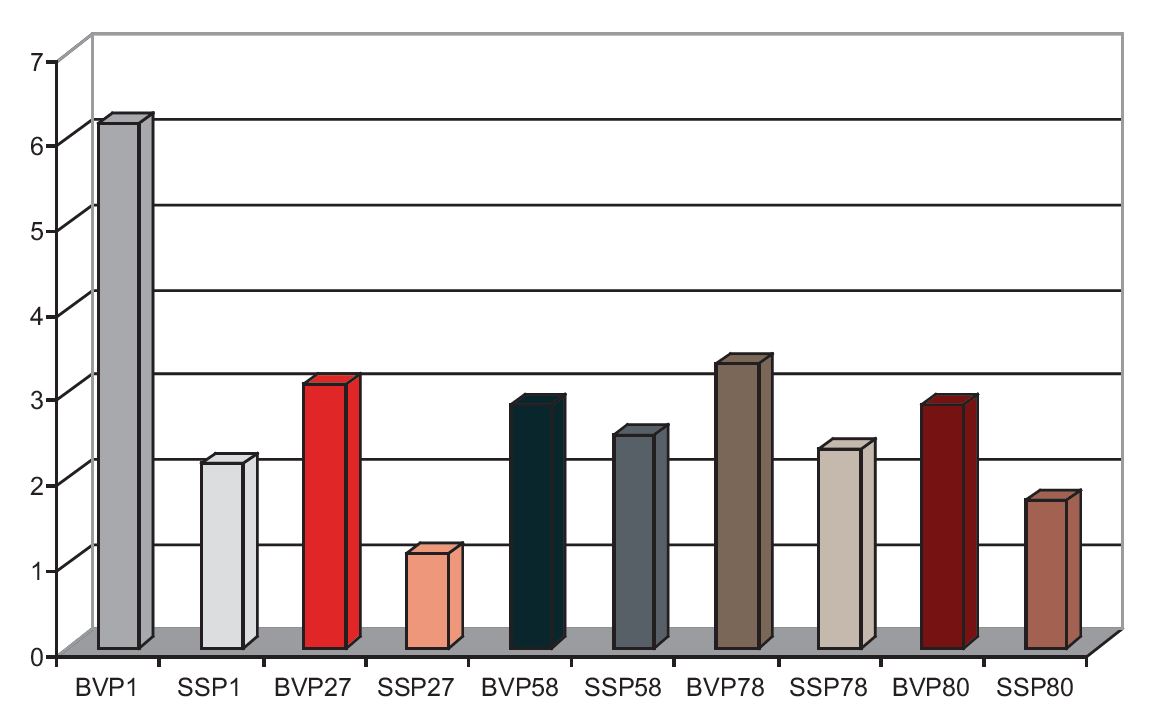 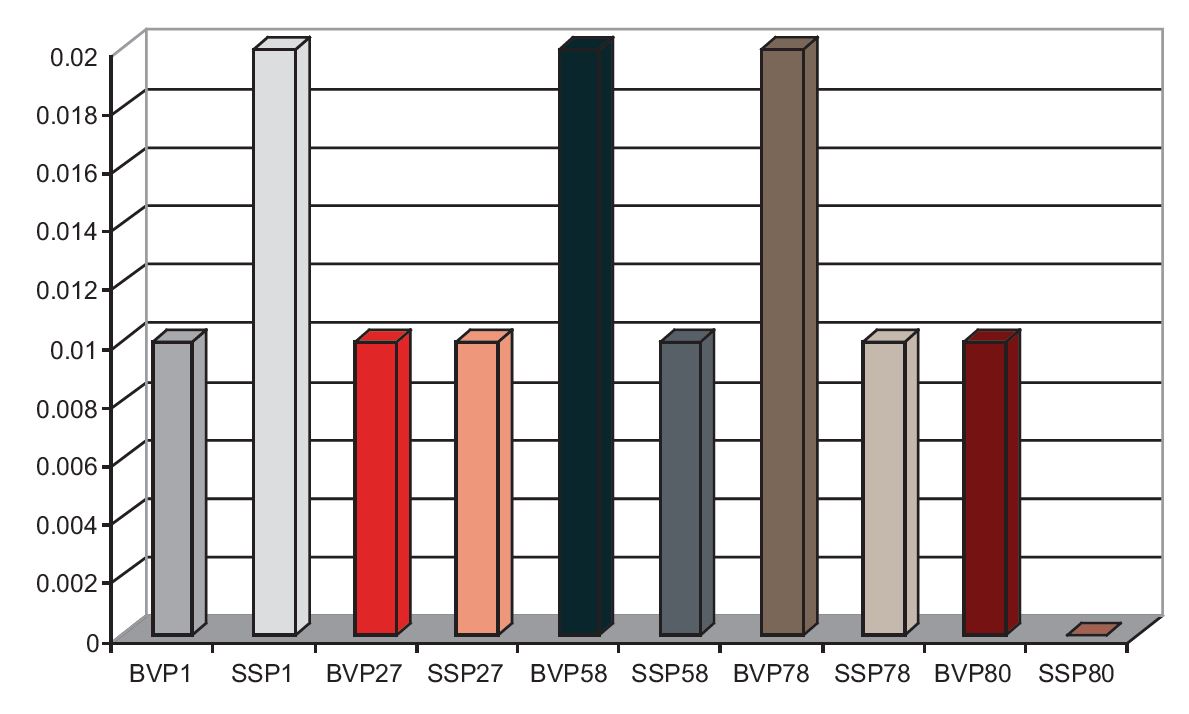 With the exception of profiles 58 and 80, the trend is to have less vanillin in the Sea Smoke wine due to the shorter ageing. Even the difference between the two 80 profiles is not significant and, as commented before, other factors in each wine are affecting the extraction of compounds from oak. Due to the water bending, profile 1 shows larger amounts of vanillin and furfural than the other fire bent profiles. The longer ageing time on Beaulieu Vineyard Pinot noir shows this difference better.

The results are very similar for guaiacol even though the bar charts look different. The scale is only showing a difference in 0.01 mgL-1 and the perception of smoke character is not possible at these low levels of guaiacol. With the exception of profile 1, the other profiles show similar or lower levels for the Sea Smoke Pinot noir as expected. Similar smoke perception is expected from all the barrels tested in these experiments due to the low concentrations of guaiacol. Sometimes the perception of smoke is associated to toast, and furfural overlaps in the correlation of both sensory attributes. Thus a barrel could be perceived as smoke and it could be due to larger amounts of furfural associated to other compounds that are not analyzed.

Two Pinot noir wines, one from Southern California and the other from Northern California, were aged in five French oak profiles. Profiles 1, 27, 58, 78, and 80 were specifically selected for this variety of grape. Beaulieu Vineyard aged a 2006 Pinot noir from Carneros for 6.5 months and Sea Smoke Cellars aged a 2006 Pinot noir from Santa Rita Hills for 5 months. The difference in ageing time had an effect in the amount of extractives from oak, being slightly lower in the Sea Smoke Pinot noir for the compounds that have an aromatic impact. Furfural was the clearest example. The Beaulieu Vineyard wine for all the profiles showed a higher level than the Sea Smoke.

Sensory evaluation was not performed for these experiments and the preference by the group of tasters attending the 7th International Barrel Symposium will be very useful to define what profiles complement Pinot noir better for each of the wine styles. The preliminary sensory studies completed by winemakers and researchers showed a preference for profile 1, followed by profile 27 and profile 58 respectively. Profile 80 is a toastier version of profile 27, and for bigger Pinot noir wines profile 80 could be preferred over profile 27.