Wine barrels are beautiful and elegant (we might be biased of course), but there is a world of science and technology swirling just below the surface. We’ve been discussing it in our Oak 101 Series (start here if you want to catch up). Today, we want to talk about a step in the process that is key to creating the barrel itself: bending the barrel.

Heat is required to soften the staves so they can be shaped into a barrel without breaking during the process. When softened, the wood increases in malleability. Think of a hard caramel candy: it is brittle until it’s heated, then it softens and can be shaped. The same thing goes with wood!

There are several methods of heat bending that can be used to safely shape the staves, and each creates different chemical results after the barrel is toasted. Of course, this means wines aged in barrels with different bending techniques have different sensory characteristics. For the purpose of today’s post, we are going to explore the two main bending methods that we use at World Cooperage: fire bending and water bending.

Fire bending is the classic bending method that has been used for thousands of years in traditional barrel coopering. In this technique, the staves are arranged in a circle with a hoop over one end and a catch ring over the other to keep them bundled. This is called a barrel rose. The barrel rose is placed over a low-temperature, open oak fire for 20-30 minutes. The outside of the staves are intermittently sprayed with water throughout the process to keep the wood from drying or getting too hot (we want to wait to create flavors until the actual toasting process). After the barrel is sufficiently heated over the fire, we can bend it into its final shape with identical end circumferences.

Water bending bending is the same concept but uses very hot water as the heat source rather than a low-temperature fire. In this method we immerse the barrel rose into water at 180°F. The barrel rose soaks in the water for 30 to 60 minutes, depending on the final toast selected for the barrel. The water is just hot enough to soften the wood for shaping, but not so hot that it boils the wood. During the immersion bath, smaller, more soluble ellagitannin compounds are extracted into the water. Now, recall from our earlier posts that tannin = perceived structure in the mouth. A water bent barrel goes to the toasting pot with less tannin to begin with since some was extracted into the water. Also, very different chemical transformations occur in a water bent barrel (versus a fire bent barrel) because of the water left in the staves. Let’s dig in further… 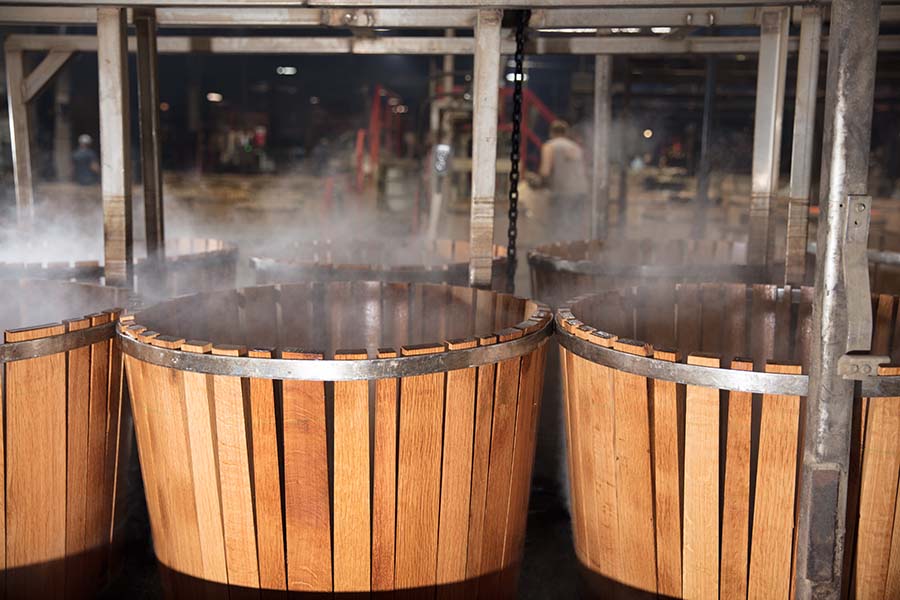 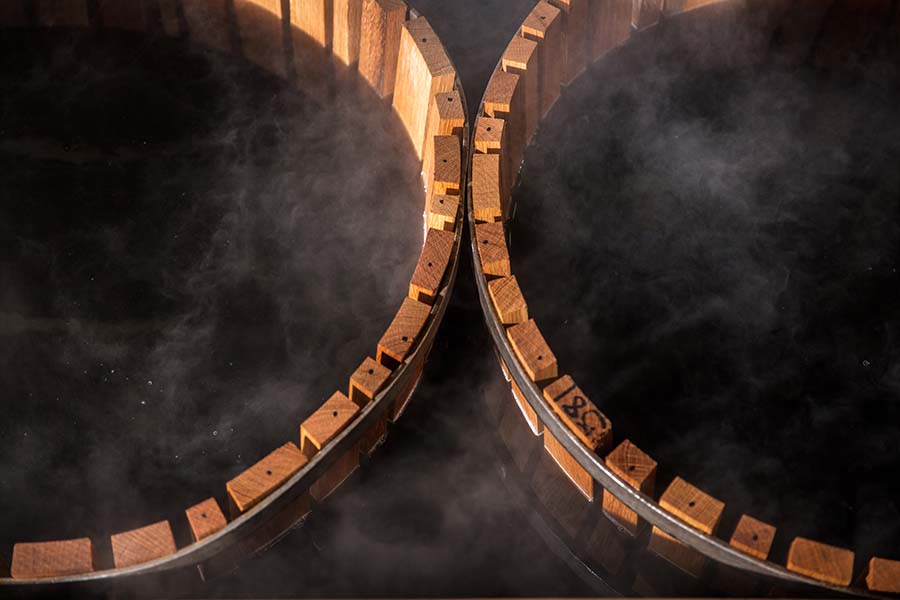 When initially put onto the toasting pot, water bent barrels do not immediately start transforming into those delicious flavors right away (see - Toasting Chemistry: barrel flavors).  Instead, the toasting fire heat works on evaporating the water left in the wood first, rather than transforming oak constituents into flavors. Since the temperature for this evaporation process is fixed at the boiling point of water (212° F), we are mostly destroying tannin during this process and the delicious caramelization of hemicellulose is held at a minimum until the water is gone. This results in lots of broken-down tannin and less extractives, which usually translates in the mouth as softer, rounder, creamier and sometimes, lower impact.

Fire bent barrels, on the other hand, start toasting almost right away and because of that, you typically get more extractives from a fire bent barrel.

After the bending process is complete, the barrel can then be toasted in various ways according to a winemaker’s stylistic requirements – to get the exact organoleptic profile they are seeking for their fruit.

There you have it! Yet another stage in the cooperage process and some insight into various ways you can customize your World Cooperage barrel.

Merry Christmas to you and yours! 🎄

#HappyThanksgiving to all of our customers, family

🎵 Loaded, inspected, delivered, they're yours!