We are excited to bring you the first article in a new series we're developing on everything oak. Welcome to Oak 101.

A Look At Oak Species for Cooperage

When it comes to picking a wood species for cooperage, oak is the Michael Jordan of choices – or simply put, the G.O.A.T.  Now we are biased, but there are some pretty good reasons oak is the only choice for our barrels. Today, let’s start at the beginning and discuss where oak comes from.

Oak (Latin name ‘Quercus’*) is in a category of plants called “angiosperms”, which is a scientific way of saying their seeds are protected by a seed case. And as you might guess, this gives angiosperms an advantage over plants whose seeds have no case. Compare it to your smart phone - the likelihood of it surviving a high impact drop is much higher when you have a hard-shell case (a lesson we’ve learned more times than we’d like to admit). Angiosperm seeds have improved pollination and seed dispersal, along with a close interaction with animals and insects which over the last few million years has led to rapid diversification around the world. Today, our friends the angiosperms account for about 80% of the current vegetation here on Earth.

*The botanical name for oak, Quercus, is derived from the Celtic quer, meaning “fine,” and cuez, “tree.” #funfact #themoreyouknow 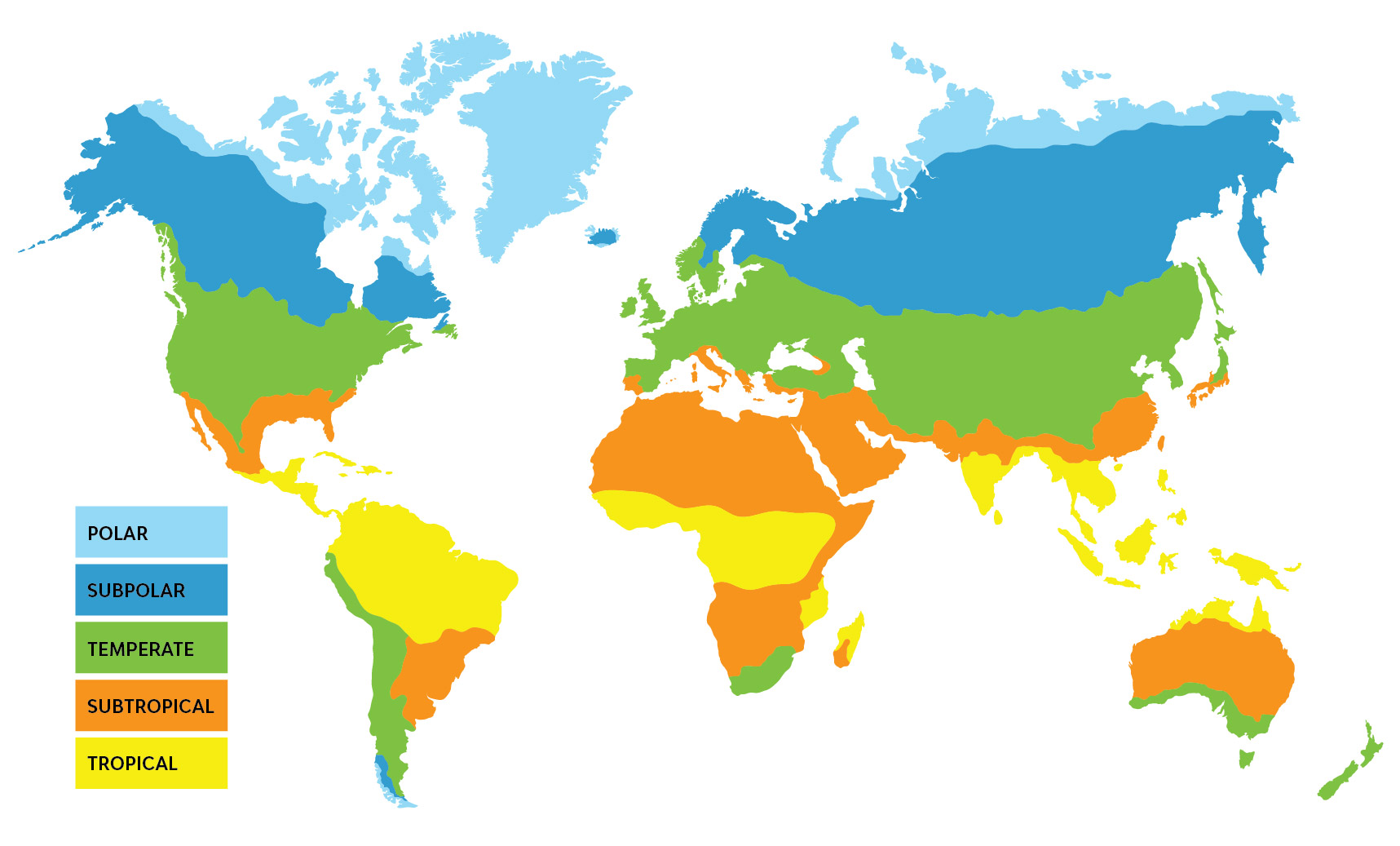 Speaking of the Earth, oak grows mainly in the temperate zones (which is sandwiched in between the tropics and polar circles). While there are over 500 species of Quercus in the Northern hemisphere, by far the three most popular for barrel production are: Quercus alba, Quercus petraea and Quercus robur. 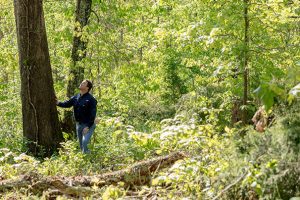 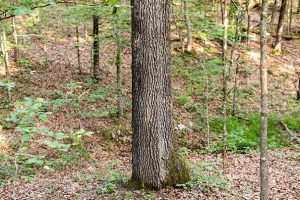 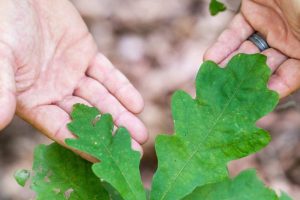 In the United States you can find “Quercus alba” from the central to eastern part of the country. This region boasts ideal conditions for slow growth, fine grain oak trees containing flavorful extractives. The combination of unique soil conditions, abundant competition and specific climate creates an environment in which trees compete fiercely for limited resources and grow slowly (read: fine grain) over the course of 80-100 years.

Our company-owned stave mills and our cooperage are situated in the heart of the Missouri Ozarks. This gives us ideal access to perfect American oak logs for staves and cooperage. Another #funfact, the founding Boswell generation of our family-owned company owned 10,000 acres of land in the Ozarks and because the oak was so great for cooperage, got into the industry circa 1912. Four generations later, we’re still rooted in the area. 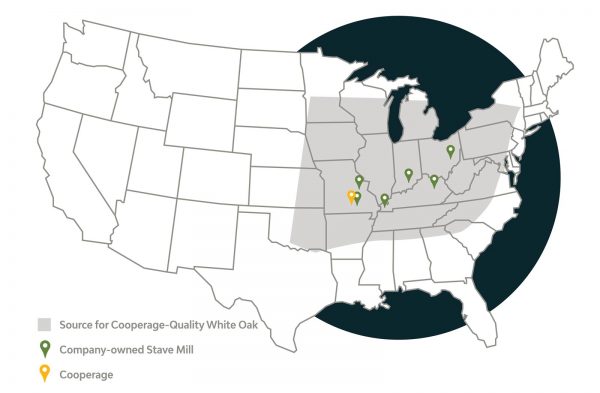 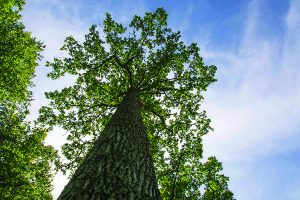 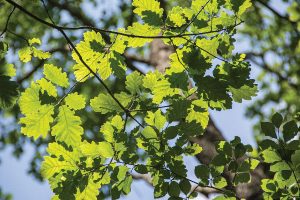 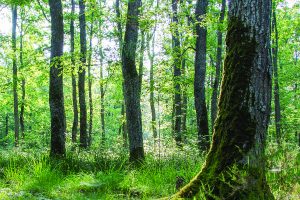 Across the Atlantic, along that same temperate zone, forests in France and Eastern Europe have the same ideal conditions for slow tree growth. The two species there, Quercus petraea and Quercus robur, exist in roughly equal proportions, although recently robur has been gaining a slight edge in abundance.

The famous forests of France are renowned in the winemaking world because they are exceptionally well managed as a revenue source and have been for centuries. The French government’s forest agency (L’Office National des Forêts, or ONF) has been actively managing these forests since the late 1600s when Louis the XIV asked his minister, Jean-Baptiste Colbert, to create a continuous supply of wood to build ships so the French could have a larger fleet than the British. Straight trees = straight logs = strong, non-leaky ships. As a result of the research and forest management knowledge driven by the ONF, the trees are tall, straight, and abundant. Our company-owned French oak stave mill is in Monthureux-sur-Saône, nearby one of those famous forests – the Vosges. 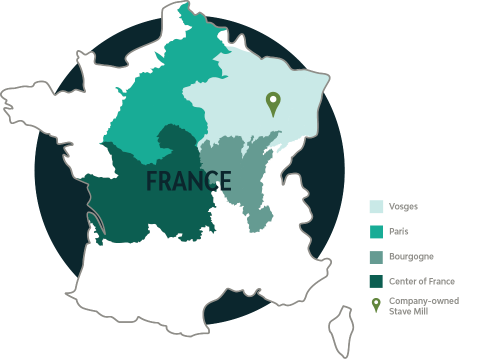 Quercus petraea can also be found in Eastern Europe. In fact, we source our European oak from the mountainous forests of Slovakia, which borders Hungary – another country known for their cooperage quality oak. The oak in these forests are well suited to the light sandy or rocky soils of the region and can withstand shade. 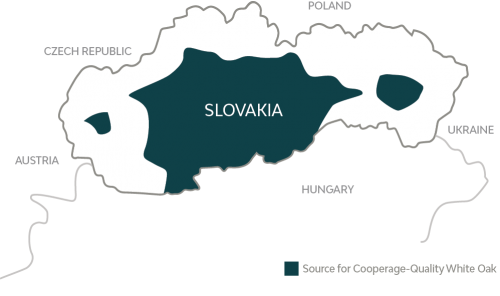 What’s the Difference for Cooperage?

Each wood type has different nuances to offer, both in flavor and production needs. For example, American oak contains more lactones than French oak, while French oak has more tannins than American oak. The former tends to have a sweeter character while the latter tends to be more spicy and delicate. American oak has more tyloses and can be quarter-sawn during stave production, whereas French oak has less tyloses and must be split. Confused? Don’t worry, we’ll dive deeper into how the physiology and chemistry of oak make it a slam dunk for cooperage, but that’s a blog post for another day.

Stay tuned for the next article in our Oak 101 Series coming soon. Subscribe to our blog to be the first to know when new posts are published.

Merry Christmas to you and yours! 🎄

#HappyThanksgiving to all of our customers, family

🎵 Loaded, inspected, delivered, they're yours!